What do stress and singing plants have in common?

December 13, 2014.  Part of the research I do is trying to determine objective ways to help doctors diagnose electrohypersensitivity. 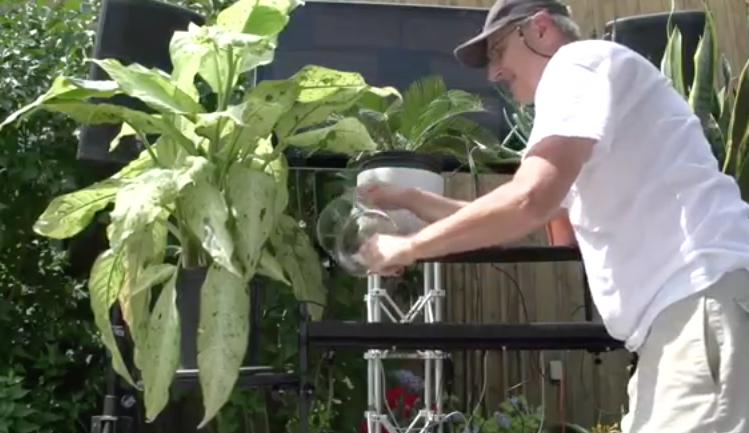 Click on the picture above to view the video.

Stress is a common response to electrosmog exposure and one way to measure stress is to use a lie detector that measures changes in skin conductance (galvanic skin response) when someone is stressed (when they lie) due to increased perspiration.  The idea is that an individual can be exposed blindly (i.e. not knowing when a device that emits electrosmog is on or off) and changes in skin conductance can be used to determine the degree of stress.

While Robert Connolly (a film producers, author, musician) and I were testing the lie detector, we decided to hook it up to a plant.  A polygraph expert, Cleve Backster, did this decades ago with amazing results.

We then tried to “stress” the plant the same way you would scare a person making a loud noise (Boo!).  To our surprise the plant showed a typical stress response.  We repeated this and each time its reaction was reduced to the point that it barely responded.  It seemed to be saying, “You’re not really going to harm me. You’re just pretending.”

Robert then had the idea that instead of watching a waveform on a computer, we should convert the response to sound and listen to the stress response.  He convinced the company that manufactured the lie detector to design a MIDI interface (musical instrument digital interface).  This allowed us to select an instrument for each plants as four plants can be hooked up at one time.  When we hooked up two or more plants they seemed to jam together and each would in turn play a solo.  The results are truly amazing and what comes out is not random noise but a delightful musical melody.

We found that plants responded differently to different people and they sometimes refused to “play” their musical instruments.

We could conduct the plants using a quart crystal wand or bowl.  The plants seemed to respond to the conductor.  Below is a short video clip of Robert’s Plant Band playing during Teslamania in 2013 at Joshua Creek in Oakville Ontario and at the Science Centre in Toronto.

All of the music at Joshua Creek was produced by the plants and the only additional sound comes from Robert’s crystal bowl.

On stage at the Science Centre, the plants are accompanied by Don Garbutt on keyboard.

To view the video of Robert’s Plant Band click here.