Thousands turn up for power-line protest 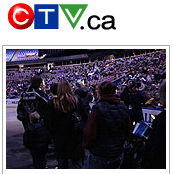 Thousands turn up for power-line protest

About 1,500 people filed into Rexall Place Tuesday evening with a strong message against the construction of massive power-lines.

The rally’s organizer, the Responsible Electricity Transmission for Albertans group (RETA), are against 500 kilovolt power-lines the province wants to run around Edmonton.

The government is looking at four different routes, and all of them pass near bedroom communities around the city.

The government’s proposal is also drawing in fierce criticism from area residents. Many would rather have the more expensive option of running the lines underground.

Medical expert Dr. Magda Havas revealed to the crowd Tuesday her studies, which have shown higher rates of cancer around voltage lines.

“The higher the magnetic field, the greater the risk of developing childhood leukemia,” said Havas. “The area around high voltage lines is a wasteland and it should never be a place where we put schools or playgrounds.”

Rally participants also signed a petition hoping their message reaches government officials who have the power to make adjustments.

Those who attended the rally also received an update on a feasibility study being done in the idea of underground lines. Those results are due out in January.

With files from Bill Fortier