When theory and observation collide: Can non-ionizing radiation cause cancer?

November 29, 2016:  The Missing Link:  Why your government isn’t protecting you from mobile phones and Wi-Fi when research shows this radiation causes cancer. 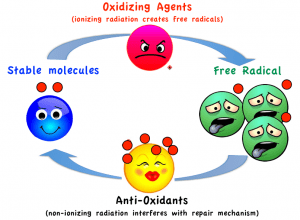 The American scientific journal, Environmental Pollution, reports in its next issue that government safety guidelines for microwave radiation emitted by mobile phones, Wi-Fi, smart meters, and other common wireless devices, are fundamentally flawed and fail to protect the public from this possible carcinogen.

See abstract at end of this article.

This paper presents a highly probable mechanism that involves an increase in free-radicals, which–in turn–explains the increased risk of cancers documented in epidemiological studies that are associated with environmental exposure to RFR and ELF EMFs at levels well below international guidelines.

•  There is sufficient scientific evidence of cellular damage caused by non-ionizing radiation (NIR) well below thermal guidelines.
•  Applying the ionization model to NIR is inappropriate as mechanisms of biological interactions differ.
•  Free radicals can and do cause cancer and NIR can and does increase free-radicals.

Scientific evidence increasingly shows wireless radiation causes cancer and infertility and other health effects, but due to a flawed assumption in safety guidelines, governments in the United States, Canada, and the UK (and many other countries) are allowing their citizens to be overexposed to microwave radiation from wireless technology.

Because governments relied on the wrong model when declaring these devices to be safe.

Ionizing radiation such as x-rays and gamma rays are known to cause cancer by detaching the negative ion – the electron – at the heart of human cell structure.  Non-ionizing radiation, such as microwaves, do not detach electrons. Therefore when determining whether microwave-emitting devices were safe to be sold to the public, governments formulated their consumer safety guidelines with the understanding that microwave radiation does not directly or immediately discharge electrons. Despite the growing number of scientific studies documenting that microwave radiation causes cancer, governments have refused to update their guidelines.

One critical aspect of non-ionizing radiation has been overlooked.

Microwave radiation was used in the 1940s for military radar, and was widely adopted for civilian residential use in the 1970s to cook food. Microwave ovens (originally called radar ranges) are shielded because microwaves are known to cause heating. At that time, it was assumed that the only danger from microwave exposure was tissue heating, known as the “thermal effect”. This led to thermal guidelines for microwave radiation.

This paper shines a spotlight on the misguided genesis of government regulations that are based on the thermal effect and documents free-radical damage induced by non-ionizing radiation.

As usage of microwave–emitting devices increases and is marketed to younger consumers without caution, we can expect a societal increase of certain types of cancers including gliomas as well as infertility and other health effects associated with free-radical damage.  Indeed this is already happening.

Havas, M.  2016.  When theory and observation collide:  Can non-ionizing radiation cause cancer?  Environmental Pollution (in press).

Abstract
This paper attempts to resolve the debate about whether non-ionizing radiation (NIR) can cause cancer–a debate that has been ongoing for decades. The rationale, put forward mostly by physicists and accepted by many health agencies, is that, “since NIR does not have enough energy to dislodge electrons, it is unable to cause cancer.” This argument is based on a flawed assumption and uses the model of ionizing radiation (IR) to explain NIR, which is inappropriate. Evidence of free-radical damage has been repeatedly documented among humans, animals, plants and microorganisms for both extremely low frequency (ELF) electromagnetic fields (EMF) and for radio frequency (RF) radiation, neither of which is ionizing. While IR directly damages DNA, NIR interferes with the oxidative repair mechanisms resulting in oxidative stress, damage to cellular components including DNA, and damage to cellular processes leading to cancer. Furthermore, free-radical damage explains the increased cancer risks associated with mobile phone use, occupational exposure to NIR (ELF EMF and RFR), and residential exposure to power lines and RF transmitters including mobile phones, cell phone base stations, broadcast antennas, and radar installations.