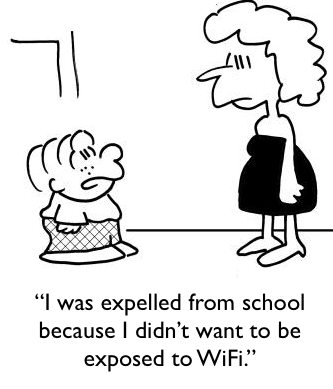 Very disturbing state of affairs that we are experiencing in Ontario Schools. School Board is threatening to fine parents and to expel students (click here for story) and they are also threatening teachers who do not toe the line regarding WiFi. What kind of country has Canada become? How can educational authorities be so insensitive, so militant, and so ignorant? Perhaps someone should follow the money because none of this makes any sense.

All parents are asking for is that computers be wired when they connect to the internet! In some areas the parents are even willing to pay for the costs of hardwiring their children’s school.

FACT: Students are becoming ill in schools with WiFi.

FACT: Studies are showing that this radiation at levels well below our guidelines are making adults sick.

FACT: Parents are trying to protect their children from this radiation and they are going to be fined and their children expelled? For what? For being concerned about a form of radiation that causes cancers, breaks DNA, affects sperm, causes heart irregularities and has been associated with headaches, dizziness, nausea, skin rashes, ringing in the ear.

Today I learned from a colleague in Switzerland that students in Swiss schools that have WiFi are experiencing the same symptoms that were reported earlier this year in Collingwood.

A few months ago another colleague told me that during the past year, two students died of cardiac arrest in San Anselmo. One was within 100 meters of a major cell tower and the other was taking a shower at his high school. Instead of putting in defibrillators, shouldn’t the school board be asking the question why are there so many heart irregularities among young students and why have at least two students (to my knowledge) in the Collingwood area experienced cardiac arrest within the past year.

Studies show that exercise-related sudden cardiac arrest in youth is on the rise and no one knows why. According to one study (Drezner et al. 2008) during a 7-year period (2000-2006) there were 486 cases of sudden cardiac arrest in the US, which comes to an average of 70 cases each year. Based on population size, we might expect 7 cases in all of Canada each year. The number in the Barrie area within the past year is much higher than one could expect for such a small population.

The school board is taking the sudden cardiac arrests seriously because they are installing defibrillators to revive students who experience cardiac arrest. That’s like issuing epi-pens to students with peanut allergies and encouraging them to eat peanuts!

Where are the health authorities in all of this? Certainly this has received a lot of media attention (TV, radio newspapers), yet I know of no health authorities, local, provincial or federal who are investigating student ill health and the cardiac problems at these schools. I can’t believe that it may take the death of one or more students before we take corrective steps to eliminate whatever is responsible for this health crisis. If it is not WiFi then let’s find out what it is. But let’s not ignore this issue and just hope it will go away because that is most unlikely.

While school boards in Ontario are planning to expel students who refuse to be exposed to WiFi, in Israel, the Labor, Social Affairs and Health committees are planning to establish cellphone-free zones in schools to minimize exposure of students and teachers to microwave radiation.  Click here to read more about “Knesset panel endorses minimizing school radiation exposure.”

Schools in parts of France, Britain, Canada and elsewhere are quietly replacing WiFi with wired connections.  A few school boards in Canada have plans to measure the levels of radiation in the classroom but, I was told, they have no intension of sharing this information with parents or the public!  What are they hiding and what are they afraid of? How did we get into this mess in the first place and when will sanity return to the School Trustees and the Health Authorities?