Is there an upside to the covid-19 lockdown, which emphasis on the lockdown?

April 20, 2020.  As I look out in my back yard–and see the birds collecting dried grass for their nest, the chipmunks filling their cheeks with sunflower seeds, the squirrels chasing each other and a wild rabbit foraging for food–I realize that there is much hope for the future despite what is going on right now.  People can handle negative news for only so long before they tune out.  I stopped watching television over a year ago.  I couldn’t stand the advertising and the inferior quality programs.  What happened to thought provoking documentaries, comedies that are truly funny and don’t require canned laughter to encourage the audience to laugh, and shows that are entertaining and uplifting and make you think?  So I get most of my news from radio and the Internet, although I find the short ads annoying on longer videos.

Anyway, the purpose of this message to is to see if there are any benefits of the covid-19 lockdown, with the focus not the word “lockdown”.

Probably fewer people died because of the lockdown as it may have reduced the number of infections.  Many of those who did die had co-morbidities that may or may not have caused their death and covid-19 may have shortened their lives.  This is all tragic news but let’s look at the other side of the equation.

As an environmental toxicologies I’m deeply concerned about the way we are treating this planet.  We pollute it, we misuse the resources, we infringe on wildlife habit and because of our actions people are dying of air pollution, water pollution, water shortages, food shortages and denatured/contaminated food.  We are degrading the environment.  In places where trees have been cut down, the soils are eroding which makes growing crops more challenging and leads to water pollution, water shortages and/or floods at different times of the year.  Wildlife is suffering as well with more species going extinct.  I’m certain Mother Nature is not very happy with us at the moment and this might be her way of saying, “Enough already!”

During the lockdown most factories closed, more people stayed at home and didn’t drive as much, air and water traffic were reduced.  Consequently, we can see improvements in air and water quality that will benefit everyone and every species on the planet.  There were fewer traffic accidents and few fatalities during the lockdown.  According to the LA Times:

They go on to write, “Between March 21 and April 11, the average daily number of all traffic collisions was about 450. It was 1,128 during the same period last year” and there were reductions in bicycle and pedestration injuries as well.

According to another report, ”

“Coronavirus appears to be reducing crime and traffic accidents in Oakville and Burlington along with Milton and Halton Hills.” 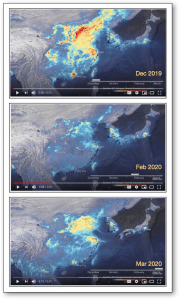 We have cleaner air!

“Carbon monoxide emissions are down by 50% in New York; the famed Venice canals are sparkling; and you can see the stars in Delhi, a city where people wore masks long before the coronavirus to protect themselves from thick car fumes and industrial exhaust.”

According to NASA, China’s air was cleaner during the Corona Virus outbreak. In one video animation emissions of nitrogen dioxide decreased during the height of the pandemic and are now beginning to increase again as people go back to work. The images on the left show air pollution in China before the shutdown (December 2019), during the shutdown (February, 2020) and now (March, 2020) the factories are beginning production and the levels of air pollution are beginning to increase once more.

In cities there is less car traffic, less pedestrian traffic and less noise pollution.  This has some unexpected benefits.  According to the Globe and Mail (April 14, 2020) …

In Montreal, noise dropped more than 40 per cent, in Ottawa 33 per cent and in Calgary, the drop was more than 60 per cent. In Victoria, where the station is located away from high-traffic areas, the noise drop was a bit smaller at almost 19 per cent.

Noise pollution in the oceans has also dropped as there are fewer boats, ferries, cruise ships and freighters polluting the oceans with their engines.

Since whales and dolphins and other sea creatures rely on acoustics for communication, this must be heaven for them, for at least a little while.

‘An important time to listen’: ocean scientists race to hear the effects of coronavirus under water.

Sound in the 100-hertz range — “pretty low on the piano keyboard,” Barclay says — dropped. The amount of the drop varied depending on the location, but worked out to around 1.5 decibels, roughly a 25 per cent reduction in power. A sound’s power, however, does not necessarily align with how much disturbance it causes, especially considering the different hearing ranges of different species.

“A lot of the larger whales use sound in this range,” Barclay says. Baleen whales like humpbacks and grey whales use low-frequency sounds to navigate and communicate over long distances. Meanwhile, toothed whales, like killer whales and porpoises, rely on higher-pitched sounds for their hunting and communication.  He goes on to state, there are entire generations of whales that have never had a quiet day in their feeding grounds.

Is our COVID-19 seclusion good for the birds?

Land animals are also benefitting from less human traffic and less noise.  Now we can hear the birds singing and occasional see deer, foxes, and bears exploring our abandoned urban landscape.  They are reclaiming their territory at least for a short time.

So there are some positive outcomes for both humans and wildlife during this lockdown.  Perhaps, as we reignite the economy, we can think about ways we can co-inhabit this planet with all the other creatures by doing less harm and living in a more sustainable way based on the lessons we learned from nature.

← Part 2: Trying to make Sense of the Covid-19 Pandemic: Cell Phone Subscriptions and Internet Users (for discussion purposes)
Is there an association between covid-19 cases/deaths and 5G in the United States? →