December 5, 2011. Dr. Oz recently aired a special show on the pain-relieving effects of pulsed electromagnetic  field (PEMF) therapy that sent shock ways across North America.  According to the experts, people can get relief from chronic pain without pills and without surgery.

PEMF technology has been around for decades and has been used to heal bone fractures, treat psychological disorders like depression, reduce swelling and pain, promote blood circulation, and stimulate the immune system. Doctors, psychiatrists, chiropractors, naturopaths, and veterinarians use PEMF devices in their practice.  Often this equipment is large, expensive and quite powerful. These devices include the Diapulse, Magnapulse, Magnacharge, Ondamed, Pulsed Energy Replenisher 2000, and various devices for Transcranial Magnetic Stimulation.  Today, different types of PEMF devices are available for the public to use in the privacy of their own home.

I’m not referring to TENS (Transcutaneous Electrical Nerve Stimulation) but rather to mats, pads, probes, cylinders, and rings that generate magnetic fields that are pulsed using different waveforms at various frequencies and intensities.  The products, available to the public, are pulsed at low frequencies (not microwave frequencies) and are relatively easy to use.

The PEMF devices tend to use earth frequencies known as Tesla-Shumann resonance (around 8 Hz) and their harmonics (multiples of the 8 Hz frequency) that are believed to have healing properties.

NASA has been testing the effect of PEMF as a countermeasure for bone loss and muscular degeneration encountered by astronauts on long space missions.  NASA scientists have  a patent for a device that uses square wave magnetic fields to enhance the rate of healing of mammalian body parts. Click here for patent information.

A few years ago, I became interested in these devices and purchased an MRS 2000 system from Switzerland, a BEMER  from Lichtenstein; and a Rhumart from Quebec with the aim of testing them to see if the claims manufacturers made were valid, and if people who are electrically sensitive can use them.

As a scientist who has been interested in the harmful effects of electromagnetic energy, I believe it is important to understand the beneficial effects of this energy as well.  Ultimately these two avenues can help us better understand the mechanisms of action of electromagnetic fields, which in turn, can be put to good use both in the field of health and in the field of exposure guidelines.

My studies are still in their infancy but I will share some of what I have learned so far.

One of the claims made by those who sell the MRS 2000 or the iMRS (Intelligent Magnetic Resonance Stimulation) system is that this technology helps blood circulation by keeping blood cells from sticking together.   I wanted to know if this claim was true, so I tested myself.

I did a live blood analysis after I worked on a computer. Then tested my blood after using the MRS 2000 mat for 8 minutes on a sensitive setting (low intensity) and found–to my surprise–that my blood cells looked much healthier. They were no longer sticking together.  See slides 1 and 2 below.  I repeated this several times and found virtually identical results.  This was encouraging.

Because my blood looked so unhealthy after working on a computer I did some more testing, which showed that my blood becomes clumped after I am exposed to electrosmog from computers and cordless phones.  Fortunately the “clumping” doesn’t last long once I remove myself from the radiation. Click here for video.

One night I bashed my shin against some furniture and knew that in the morning I would have a large bruise.  The skin was cut but not bleeding.  I used the MRS 2000 probe set at high for 8 minutes and went to bed.  The next morning there was no bruise, no swelling, and no pain, just the remnants of the cut.

Microcirculation of the Blood and the BEMER 3000

Dr. Klopp, at the Institute for Microcirculation in Germany, tested the effect of the BEMER 3000 (Bio-Electro-Magnetric Energy Resonance) and took some amazing in situ videos.  He found that blood circulation after using the BEMER is much improved as seen in the video below.

He also found that white blood cells behave differently.  Instead of flowing quickly through the vessels, they seem to move more slowly along the inside of the blood vessel and from there can easily migrate into the tissue if an infection is detected. What these two videos indicate is that the BEMER promotes blood circulation and the immune system.

A few months ago, I visited a colleague, Dr. Jeff Marrongelle, in Pennsylvania and showed him the Rhumart, a device designed by Dr. Roland Drolet in Quebec that is named after the first two illness it was tested on–rheumatism and arthritis.  Dr. Marrongelle tested the Rhumart on several patients, all of whom responded positively after a short treatment.

Here is the result for Patient A, who complained of chronic back pain.

Two large rings were used that treat the entire body.  After a 10-minute session on the Rhumart, Patient A claimed to have an 80% reduction in back pain. 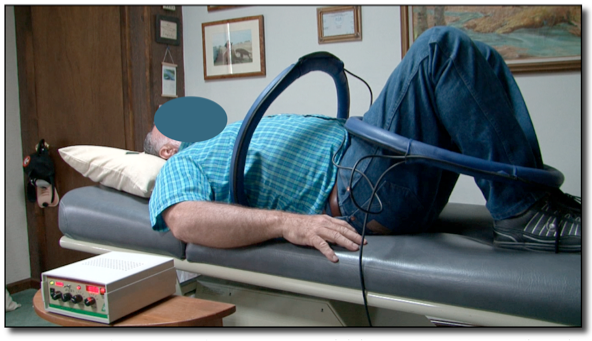 We tested this patent before and after his Rhumart treatment with an interstitial scan (ES Teck) that identifies abnormalities in the body based on the conductivity and resistance to a weak direct current.  The following two diagrams show the before and after scans.

It is clear that the inflammation of the nerves along parts of his spinal cord (shown in red) disappeared after the 10-minute treatment giving us an objective measure of the subjective pain relief Patient A experienced. Two weeks later the pain had not returned.  Such a rapid, long-lasting response to chronic pain is amazing!

One concern is that there might be adverse long-term effects of PEMF devices. To date, I have not found any studies documenting this for PEMF although I am still at the early stages of my inquiry.   If anyone reading this knows of some studies, then please let me know.

Some doctors recommend that PEMFs not be used on people who have cancer because they may stimulate the growth of cancer cells, while others report that PEMF therapy lessens the side-effects and enhances the effectiveness of chemotherapeutic drugs.  And still others report that growth of certain types of  cancer cells may be reduced with exposure to very low levels of electromagnetic fields modulated at tumor specific frequencies between 100 Hz and 21 kHz.  This type of treatment has been tested on liver cancer, breast cancer, and ovarian cancer with promising results. So, the relationship between PEMFs and cancer is quite complex and needs further investigation.

Some people who are electrically sensitive are unable to use the devices but others seem to do quite well.  The reason for this is not known and requires further study.

I will continue to do research in this area and will provide updates periodically on this website. My research has taken me to Europe and parts of North America where physicians are using this technology in their clinics. We plan to provide that information to the public in the form of a video documentary in 2012.

Thank you Dr. Oz for making people aware of this technology.  Perhaps doctors using these device in their clinics and scientists testing the mechanism involved will begin to share their results with people suffering from chronic pain, poor circulation, immune deficiencies and other ailments that might be helped with PEMF therapy.  Energy medicine, in its various forms, may very well be the medicine of the future.

Disclaimer:  I do not sell these devices and do not receive any financial benefit from the manufacturers.  My sole interest is to better understand how PEMFs affect the body and to share that information with those who are interested.