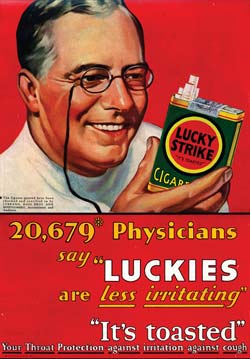 March 3, 2011. The Journal of the American Medical Association (JAMA) is considered one of the most influential publications used by the health industries to disseminate information to doctors. Many years ago, it had been used to advertise that cigarets were safe. Pictures of doctors where shown smoking and they often endorsed certain brands.

So when doctors read about a National Institutes of Health cell phone study in that AMA journal, and it shows 50 minutes of cell phone radiation increases metabolic activity in the brain – it’s a big red flag and an unlucky strike against the wireless industry.

No longer can Health Canada or the wireless industry scientists provide the disinformation that  “non-thermal, non-ionizing microwave radiation has no biological effect on the human body”! Instead, they now say “there are no health effects”, which is equally false (see study on brain tumors and mobile phones).

Now, when a patient asks their doctor, “Doctor, is it safe to use my cell phone?  Can I give one to my child?”  The doctor now has a green light to say,” Well, I just read a study in a very prestigious medical journal that shows cell phones do affect the brain. We don’t yet know if this effect is harmful or not, so, until we do,  I suggest that you use a cell phone with caution and as something that could be dangerous.  And I certainly would encourage young people to avoid cell phones except for emergencies.”

So now the doctor is off the hook. “They” have warned us.

What few people realize is that it takes two to tango. If  a cell phone alters your brain, what is the radiation from a nearby cell phone base station antenna doing to your body? The cell phone and the antenna mounted on towers and building rooftops use the same frequencies to communicate.  The major difference is that if you live near a cell phone tower with multiple antennas, your entire body (and not just your head) is going to be exposed to this radiation. AND that exposure is for a much longer period than a single 50-minute exposure as in the JAMA study mentioned above.

I certainly would not want to live on the upper floors of a high rise building, in a city like Toronto, facing the CN Tower or facing a nearby building with multiple antennas on the roof.  It is unlikely that this long-term, cumulative exposure to microwave radiation is going to be benign.  Indeed people who live within 400 meters of these antennas often complain of ill health.

The potential dangers of microwave radiation from cell phone towers is finally being announced to the general public by health authorities. Another red flag to the wireless industry was recently raised by  the government of Israel.

The directors general went on to say that they will oppose any intention to expand the mobile infrastructure to accommodate 4G phones until such time that the need and justification for such a move are examined in depth and in coordination with the two ministries. Click HERE to read the story.

As the United States attempts to rollout the new true high speed 4G phones and towers capable of sending and receiving true 1GBps, Israel is putting on the brakes. This is good news for activists who are attempting to slow down the widespread adoption of this technology.  It seems that the message from activists is getting wide recognition.

The cell phone companies are now worried about this negative publicity. Instead of putting up new true high powered 4G towers that could be potentially dangerous, they have decided to rename the existing 3G HSPA wireless network to 4G! This has caused massive confusion for the public that is wanting and waiting to upgrade to the latest and greatest digital wireless device. Wireless hardware manufacturers are lost in a sea of confusion. Investors are worried about the future.   Read about it HERE

Clearly, something is going on behind the scenes . . . the wireless industry is on the run.