Foreign and domestic literature on biological effects of electromagnetic radiation has been examined for information relating to safety criteria. Emphasis was placed on obtaining relevant information on frequencies below 300 mc, most particularly on the high frequency (3 – 30 mc) region.  This information is reviewed and evaluated.

Note:  mc refers to millions of cycles per second or MHz.

This document, dated one year after the United States adopted the 10 mW/cm2 standard for military and occupational exposure in the United States (See Pick of the Week #2), was written by a medical doctor who reviewed literature from the Tri-Services Conferences and English translations of research conducted in Germany, Poland, Ukraine, Czechoslovakia, and the former Soviet Union.

The most important paragraph in this document is the last one, which recommends the following: “to the extent practical, a conservation approach to safety criteria (approaching the USSR standards) be applied, particularly where hazards to non-controlled personnel may be involved.” This conclusion is based on the finding that for both microwave (300 MHz to 300 GHz) and lower frequencies (0.01 to 300 MHz) “limited clinical studies of humans and controlled animal experiments present evidence of harmful effects at intensities considerably lower than 10 mW/cm2.”

At the time of this writing, the American guidelines were 10 mW/cm2 averaged over 0.1 hour (6 minutes) and the USSR standards were frequency specific and orders of magnitude lower (see table 1 below).

What is clear from this document is that the U.S. Military was told that their guidelines were too high and should approach those of the former USSR in order to protect public health.  The guidelines for public exposure are currently 1 mW/cm2 for the U.S. and 0.01 mW/cm2 for Russia (1% of the U.S. guidelines).  Despite this warning back in 1967 little has been done.  The U.S. guidelines for public exposure are still 100 times higher (less protective) than those in Russia.

There is also clear evidence that non-thermal effects were documented back in the late 1950s at intensities well below 10 mW/cm2 and both at and below microwave frequencies.

This internal document, written by a medical doctor from the Institute for Defense Analysis, had restricted access as only 15 copies were circulated and Dr. Glaser received copy 5 of the 15.

Some of the key points include the following:

1.  Thermal:  Electromagnetic radiation increases the thermal load on the body; effect is primarily due to field strength and secondarily to wavelength (or frequency). Above 10 mW/cm2 thermal effects predominate.

According to Gordon (1964) “radiation over an interval of one-two months at an intensity not productive of the integral thermal effect, can produce severe functional changes in the central nervous system.”

Osipov (1965) noted certain neurological and cardiovascular symptoms, slight changes in the blood, and functional disorders of the central nervous system at frequencies well below the microwave band (0.01 to 1.5 MHz).

Khazan (1958) exposed people to frequencies of 0.3, 0.5, 20, and 75 MHz and noted similar changes and disruption of the processes of excitation and inhibition of the nervous system. All of these radio frequencies are well below microwaves (300 MHz to 300 GHz).

3.  Safe levels:  Levels considered “safe” range from 0.003 to 10 mW/cm2 and are frequency specific in some countries.  The U.S. adopted the highest (least protective) values and the former USSR adopted some of the lowest (most protective) ones. In 1956, NATO recommend a limit of 0.5 mW/cm2 and in 1963, the General Post Office of Great Britain recommended a value of 0.01 mW/cm2 for frequencies greater than 300 MHz.  In Czechoslovakia the power density ranged from 0.003 to 0.013 mW/cm2 for frequencies between 10 kHz and 300 MHz.  See Table 1 below. 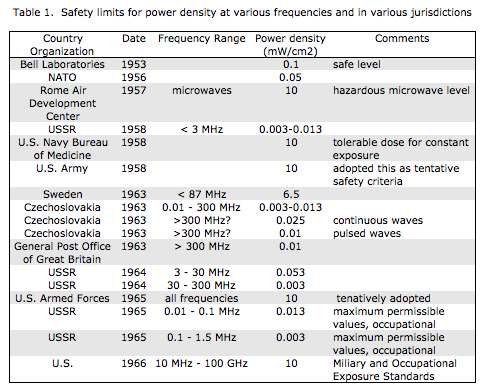 ← #002: More than 2000 Documents prior to 1972 on Bioeffects of Radio Frequency Radiation
Adding light to heat of WiFi debate →