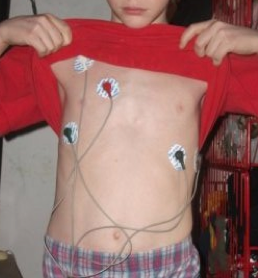 During the past year I have become increasingly interested in the effects of microwave radiation on the heart.  This interest is based on a number of observations.

Some people who are electrically sensitive complain that they have a rapid or irregular heart beat and feel chest pressure or pain (Eltiti, 2007).  We conducted a “proof of concept” study to determine if we could measure heart rate changes caused by microwave radiation with real-time monitoring.  We found that some individuals developed a rapid or an irregular heart beat when exposed to pulsed microwaves (from a cordless phone base station) at levels considered safe by the WHO, FCC, and Health Canada (Havas et al. 2010).

During the past year I have heard stories that children who attend schools with WiFi are complaining of a racing heart while in school (link to video).  Two of these students in the Barrie area (Canada) were given heart monitors to wear and one young girl was scheduled for heart surgery because her cardiologist couldn’t figure out what was wrong.  Her parents postponed the operation, removed the WiFi in their home, and her symptoms did not return during the summer when she wasn’t attending school.

During the past few years two different students, also in the Barrie region, experienced exercise-related sudden cardiac arrest.  Fortunately they got help quickly and survived.  Schools have now installed defibrillators as a consequence.

Is it normal for young people to complain of heart problems and for two students in a relatively small community to experience sudden cardiac arrest?

I began to research this subject and learned that sudden cardiac arrest is the leading cause of death among athletes (Drezner et al. 2008) and appears to be increasing among adolescents and young adults (Maron et al. 2009; Zheng et al. 2005).  Sudden death among athletes increased slowly from 1980 to 1995 and then rose suddenly in 1996 and continued to increase up to 2006, when the study was terminated (Maron et al. 2009) (See figure 1). Coronary heart disease and blunt trauma to the chest during competition have been identified as the cause in some cases but other cases remain a mystery.

Doctors do not know the reason for this disturbing trend and according to one study (Dencheve et al. 2010), medication for children diagnosed with attention deficit hyperactivity disorder may increase the risk for sudden cardiac death.

One aspect that has not be considered is the increasing exposure to microwave radiation from mobile phones, cell phone antennas, and wireless technologies in the home and school environment.  Could it be that our low level exposure to microwave radiation is placing undue stress on the nervous system of these children and is contributing to heart irregularities that become exacerbated with exercise resulting in sudden cardiac arrest?  If microwaves at low intensities (as shown in our study) can affect adult hearts then this radiation can certainly affect the hearts of children.

In November 2010, two schools in the Barrie area were monitored for microwave radiation.  What is particularly disturbing about the results obtained is that of the 20 rooms measured 17 of the classrooms had levels at or above the levels that caused heart irregularities among adults in our heart rate variability study (0.003 milliwatts/cm2). But even more disturbing is that levels of microwave radiation exceeded Health Canada’s Safety Code 6 guideline near a computer in one classroom (1.342 vs 1 milliW/cm2)!  I will write more about this in a separate report.

We know that pace makers can malfunction if they are exposed to interfering microwave frequencies and people with pace makers are told to stay away from microwave ovens and other microwave emitting devices.  The newer pace makers have shielding to prevent interference.  But the human heart comes without a shield.  So it is not only the child or adult with a pace maker that needs to be careful about their exposure to microwaves, all of us need to be aware that this radiation may affect the heart.

This concept is supported by the early research on microwave radiation.  Cardiovascular problems seem to be common among microwave workers.  In (#22:  A Very Important Symposium), Healer (1970) stated that:

“In the interest of occupational hygiene, many Soviet investigators (and at least one U.S. researcher) have recommended that cardiovascular abnormalities be used as screening criteria to exclude people from occupations involving radio-frequency exposures.”

The authors of this publication were with the Institute of Labor Hygiene and Occupational Diseases, USSR Academy of Medical Sciences, Moscow.  This is just one in a series of study from the Soviet Union that examines the effect of microwave radiation on the nervous and cardiovascular system.  My comments are in square brackets [ ].

The purpose of this report was “to describe the nature, severity, and clinical course of the cardiovascular changes that follow chronic exposure to microwave irradiation. This information was derived from long-term [3 to 6 years] clinical observations on 130 patients. The data pertain to 105 (90 males and 15 females) patients. Those with chronic tonsillitis, organic neurologic lesions, and cranial trauma were excluded.”

The patients had been working with microwaves in the one-centimeter range waves for at least 5 years and were exposed to fairly intense levels especially in the early years (at and below several milliW/cm2).  Intensities above 1 mW/cm2 would now be considered high exposure.

Subjects were placed into two groups.  Subjects in group one had asthenia (weakness and low energy), and complained of headache, fatigue, insomnia and pains in the heart region.  A number of these persons had arterial hypotension (low blood pressure) and bradycardia (slow heart rate).

Subjects in group two complained of fatigue, irritability, headaches, nausea, and vertigo.  Some experienced autonomic-vascular crises with severe headaches, chills, tremor, loss of consciousness, pallor or reddening of the face, constricting pain in the heart, labored breathing followed by great weakness.  Subjects in this group were more likely to experience tachycardia  (a rapid heart rate) and high blood pressure, autonomic-vascular dysfunction and hypothalamic insufficiency.  The hypothalamus, a small portion of the brain just above the brain stem, links the nervous system to the endocrine system and controls body temperature, hunger, thirst, fatigue, sleep and circadian cycles. A hypothalamic insufficiency could affect any of these functions.

The authors concluded the following:

“Thus, long-term observations showed that the nature and intensity of the cardiovascular reactions to prolonged exposure to microwaves are closely related to neurologic changes, especially those in the autonomic nervous system. They also vary with the individual. Some exhibit for a long time only mild asthenic symptoms with sinus bradycardia and arterial hypotension with no signs of general or regional hemodynamic disturbances.

Others develop autonomic-vascular dysfunction, often with symptoms of hypothalamic insufficiency and angiospasm [spasmodic contraction of the blood vessels with increase in blood pressure] which sometimes impair the cerebral [brain] and coronal [heart] circulation.”

The early literature showing cardiovascular dysfunction among microwave workers, our study showing heart rate irregularities with pulsed microwave exposure at a fraction of international microwave exposure guidelines; the complaints of electrically hypersensitive individuals of heart irregularities; student complaints of heart flutters and a racing heart; and the increase in the rate of sudden cardiac arrest among young people to the point that schools are installing defibrillators cannot be ignored.

Just as workers ought to be screened if they are going to work with microwave radiation,students ought to be to screened each year at school to ensure that they do not have an underlying heart condition that may be exacerbated with WiFi exposure.

A heart flutter may be an early warning that something more serious can happen.  Anyone who experiences a rapid or irregular heart rate that comes on suddenly with mild or no physical exertion when they are exposed to wireless technology should heed the warning, minimize their exposure as quickly as possible and visit a cardiologist.