An analysis is made of the scientific research and values influencing the policy decisions that led to the adoption of the 1966 U.S. standard for exposure to microwave radiation. This analysis is used as a tool for understanding the problems faced by those who set standards. An effort is made to unravel the complex motivations that lay behind the adoption of the microwave standard. Based on the past record, it is suggested that standard setting remain distinct from basic scientific research and that adversary procedures be used only as a last resort in seeking consensus over a proposed standard.

Based on published and unpublished literature as well as interviews and questionnaires, the authors of this report pieced together the process that led to the 10 mW/cm2 standard to protect military and occupationally exposed personnel from microwave radiation.  For those new to this topic, it is well worth reading.

What is clear is that the original recommended standard (0.1 W/cm2 or 100 mW/cm2) established in 1953 was based on a quick-and-dirty calculation that was grossly flawed and was almost immediately revised downward to 10 mW/cm2. This calculation was based entirely on the ability of a 70-kg man to dissipate heat. The 0.1 W/ cm2 was obviously too high so a safety factor of 10 was introduced to reduce it to 10 mW/cm2 (see graph below).

Initially the disagreement about the appropriate safety factor ranged from 10 recommended by the US military to 100 suggested by General Electric to 1,000 suggested by Bell Telephone Laboratories. The military prevailed.

Evidence for non-thermal effects was discounted.

At this time, the primary use of microwaves was for radar with limited research on medical diathermy. After the war, microwave use was extended to microwave equipment for heating for both industrial and medical use. The prevailing view at the time was that microwaves, if used with caution, were apparently a safe, convenient and comfortable form of heating for local applications to tissues.

Emphasis was to protect military operations and secondarily to protect military personnel. Protection of the general public was barely discussed and no public standards were set because microwaves were viewed as radar and radar was viewed as a military and industrial problem.  At that time, except for those who lived near military bases, most people were unlikely to be exposed to microwave radiation.

According to the authors, two paths are available to the public, legal action (making damage claims for alleged microwave-related injuries) . . . and the political path (introducing bills at the federal and local levels to regulate exposure to microwaves). Both are adversarial and costly, but perhaps not as costly as non-action.

The excuse that is often used to delay establishing safer guidelines is that we don’t know the mechanisms involved.  One thing that we seem to have forgotten is that “standard setting does not require detailed knowledge about mechanisms or explanations about anomalistic phenomena.  To set a standard one simply needs to know at what level-for whatever reasons-harmful effects appear.” 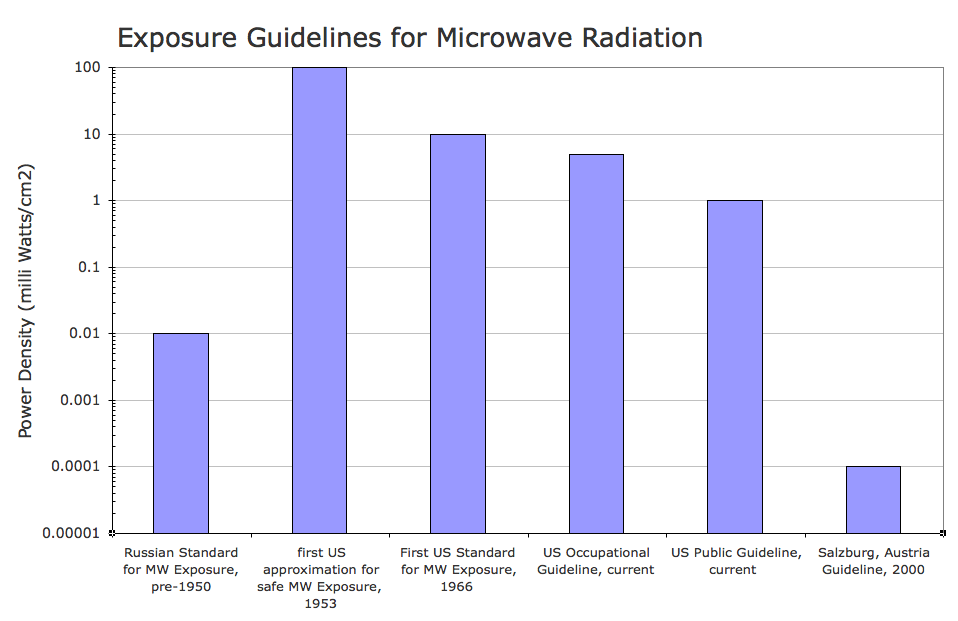 Some of the deleterious effects resulting from microwave exposure available to those establishing the standards included:

The Tri-Service program (Navy, Arm, Air Force) concluded that the biological effects of microwave exposure involved were: (i) thermal, (ii) noncumulative, and (iii) of little concern since “man has a built-in alarm system coupled with his threshold of pain that protects him from thermal injury.”

The Tri-Service program was wrong on all three counts.  Biological effects of microwave exposure can be both thermal and non-thermal; cumulative, and of great concern as most people are unable to detect exposure.

The view expressed by Paul Brodeur (a critic of past policy) was that a standard below 10 mW/cm2 would interfere with national defense and military preparedness, and as a result all else was ignored, including truthfulness and public welfare.  The authors did not support this view as various internal views, bickering, and factions made this a much more complex process.

However, the authors do state the following about the process and the outcome:

The decision makers were preoccupied with winning a major war, and then, during the first Cold War, with erecting a strong defense.  They were not primarily concerned with public health or environmental monitoring. The decisions concerning technology were made in the context of global or national security rather than that of individual welfare.

The persons who drew up and accepted the 10 mW/cm2 standard did not believe that this level of exposure was likely to cause any serious consequences in the foreseeable future . . . but, according to the authors . . . that does not dictate that it was the best standard or that it was valid.

The literature, upon which the standard was based, was superficial and deeply flawed.  McLaughlin, a physician and medical consultant at Hughes Aircraft Corporation, reviewed the research on which the standard was based and noted that “the early work done by the Navy and the AAF [Army Air Force] was not extensive, the power used was very small, the work was not quantitative in character, and the controls were inadequate. Therefore, this work cannot be relied upon as scientific background to establish the possible health hazards of microwave radiation.”

The flow of information from the military and industry was limited in part due to threat of legal action stemming from unanticipated future effects. This is more true today than in 1966 as our use of and exposure to microwave radiation has increased exponentially and the public guideline of 1 mW/cm2, still based on a heating effect and established more recently, does not protect public health.