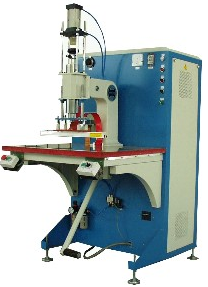 Few people realize that radio frequencies (RF) are currently used in the manufacturing industry to mold plastics for car parts, vinyl fabrics, and food packaging.  In fact this industry used the first incarnation of the “microwave” oven that we all enjoy today.

Our home microwave oven works on radio frequencies to heat food.  Similarly, radio frequencies, which are much more energy efficient than thermal energy production by fossil fuels, are used to mold and seal plastics.  These machines are called RF heaters.

Are these machines safe and who sets the safety standards?

After leaving the U.S. Navy, Dr. Zory Glaser worked for NIOSH (National Institute for Occupational Safety and Health) and helped formulate our current guidelines with the Canadian government for radio frequency radiation.   He passed along a document that I would like to share with you that demonstrates the reasons for establishing the “thermal effect” guidelines.

Radio frequency (RF) heaters are known to leak radiation. Dr. Glaser was shocked to see that machine operators had taped large fluorescent light tubes to the outside of the machines to determine when they were operating.  What worried him was that there were no wires connected to the lights.  The leaking radiation was so intense it would light up the tube.  These observations resulted in a study by Canadian government officials to determine if these machines were safe to use.

Stuchy, Repacholi and Mann (1980) conducted this survey (click here) to determine the radiation exposure of those working near dielectric (RF) heaters in Canada. RF heaters and microwave ovens operate between 1 MHz and 2.4 GHz and operate from a few hundred to 100,000 Watts of power. The heat, at the point of contact of the plastic and hearter, is intense but drops off rapidly a few feet away.  If the machine is not properly shielded, the radiation will leak and be absorbed by the workers.

At the time of this study the maximum allowed exposure measured at the human body was 1 mW/cm2.  This level is called the “thermal effect” based on the heating of human tissue. It was assumed (and still is, incorrectly) that if the radio radiation isn’t powerful enough to heat the body there would be no adverse health effect.

To their horror, 38% of the machines exceeded the Canadian safety guidelines. What happened to these machines?  Were the output levels lowered (like we are asking be done for WiFi in schools)?  Did we ship them to third world countries? Or, are we still using them today?

According to Dr. Glaser, this industry is largely responsible for the safety guidelines that we currently have in place based on the “thermal effect” — a guideline set to limit the amount of leakage of radiation from your microwave oven so it does not heat your body.

The conundrum we now face is that if we lower the guideline (below 1 mW/cm2) to account for “biological effects” such as increased permeability of the blood-brain barrier, increased calcium flux, changes in enzyme activity, among others — will these limits shut down our packaging and food processing industries?

Perhaps the protection of this industry is one reason, among many others, why health protection agencies are  unable to lower the existing guidelines for RF radiation.