This study is based on 92 active Air Force bases that were in operation during 1950-1969 in the United States. The authors hypothesize that the chronic low intensity microwave exposure to peak pulse patterns, characteristic of radar, could influence immunocompetence and account for the high cancer mortality near air bases. They cite a 1979 study by Meecham and Shaw that documents a 20% higher mortality rate for residents within 2 to 3 miles of the Los Angeles International Airport compared to a neighborhood 8 to 9 miles away.  In addition to cancers a higher incidence of birth defects and nervous breakdowns, among residents who live near airports, was reported in Japan and Great Britain.

This study brings to mind, PAVE PAWS, the US Air Force Radar Base that was installed in 1979 and was the focus of several cancer cluster studies in Cape Code, including an elevated rate of Ewing’s Sarcoma (a malignant tumor often found in bone with a peak occurrence between 10 and 20 years of age). According to the National Academies’ National Research Council report in 2005 and the Massachusetts Department of Health report in 2007 the radiation was unlikely to have played a primary role in the incidence of the various cancers and health effects.

However, based on Air Force measurements outside the security fence, values for average and maximum power density  (attachment 4) are well above the Russian guidelines of 10 microW/cm2 with “corrected average” values ranging from 10 to 230 microW/cm2.

The 1982 study by Lester  (PhD) and Moore (MD) was based on the period 1950 to 1969.  Airports and air force bases have changed dramatically since that period with many more transmitters and frequencies.

The good news is that few homes are built near large international airports. The bad news is that those who work at an airport (or an air force base) and those who work near airports, like hotel employees, are exposed to radar.  I stayed at an hotel that was several kilometers away from the Toronto International Airport and I was still able to measure the airport radar in my hotel room.  At that hotel employees said that their customers had difficult sleeping but they attributed this to noise from car traffic.

Jerry Straub recently wrote, “When I first started flying, in the 1950’s, they still had aircraft radios which were tuned by a hand-crank or knob (analog device).  As electronic technology has progressed, aircraft radios have become magnificent solid state devices with virtually unlimited ability to control frequencies and discriminate between them.”

Then airports had two frequencies; (control) tower and ground (control). Here’s the URL for the current airport information for Detroit Metro (DTW): http://www.airnav.com/airport/KDTW (see table below). 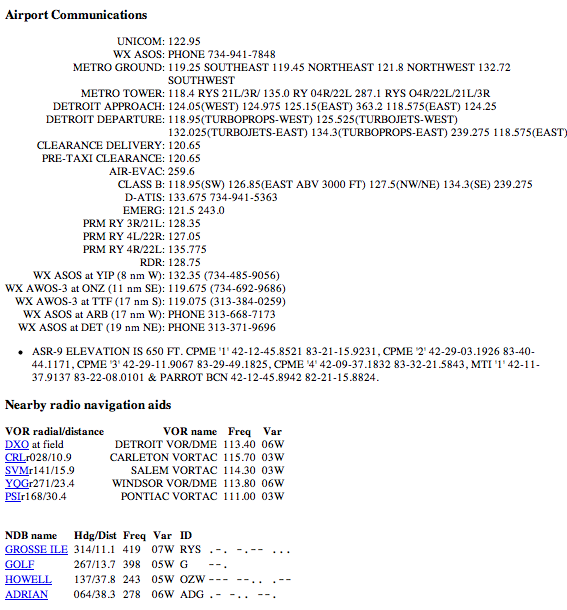 There are about 37 frequencies in use at DTW for communication, plus another 9 locally  for navigation. This does not include the frequencies used for instrument approaches for each runway.

If cancer rates near air force bases and airports were elevated prior to the 1980s, I wonder what they are today and how is this radiation affecting those on board aircrafts, especially the crew?

A few years ago I was returning from the US and, while the plane was loading, I asked the pilot and co-pilot if they knew what levels of radiation they were exposed to in the cockpit.  The co-pilot frowned and told me that the airline industry monitored the levels a few years earlier but they were never provided with the results, which wasn’t good news.   Wonder what happened to that study?

On that flight I gave the pilot my RF meter and he did measurements in the cockpit during the flight. The values were below FCC guidelines but were well above Russian levels of 10 micoW/cm2.   I measured the levels of radiation in the cabin during flight and found they decreased from the front to the rear of the plane. The highest reading I measured was around 35 microW/cm2.

A few years ago I measured low frequency magnetic fields on an airplane. Instead of 50 or 60 Hz, airplanes operate at 400 Hz.  The lowest levels of magnetic fields were at the rear of the plane (around 3 to 5 mG) and the highest readings were in first class (around 20 to 30 mG).

The pilot thought for a moment and said that many of his colleagues, who had retired at age 55, developed cancer and didn’t live long after retirement.

WIFI ON AIRPLANES AND AT AIRPORTS

The most recent change on airplanes is the introduction of WiFi.  A friend who recently flew on a commercial flight with WiFi complained of feeling unwell.

Flying is a dangerous business and it is become more dangerous with all of this additional exposure to radiation at the airport and on the aircraft. Wonder how long it will take for the airline industry to recognize that the lower the levels of radiation the safer the flight for the crew and passengers alike?