#026: CN Tower EdgeWalk: Thrill seekers may get more than they paid for.

The Toronto CN Tower, the world’s tallest tower at a height of 1815 feet, is offering a new attraction for those wanting a great view of Toronto and a real thrill: EdgeWalk. Starting August 1st 2011, for only $175,  you will be able to walk around the outside of the CN Tower with a hook to an overhead rail keeping you in place!  Read Carola Vyhnak’s report in the Toronto Star.

Those who participate may get an adrenalin rush not only from the height but also from the radiation emitted by the TV, radio and cell towers.

The CN Tower, completed in 1976, was built to improve communication for the police, firefighters, ambulance drivers, and for those wanting better TV and radio reception.  It is currently home to hundreds of antennas and provides transmission for UHF, VHF, television, FM radio, microwave transmissions and fixed mobile systems. According to the official website, “All major Broadcast, AM, FM, and DAB Radio stations as well as wireless service providers use the CN Tower for transmission.“

According to one source, when the CBC built their building on Front St. W., across from the CN Tower, they had to install a lot of shielding to prevent interference.

A Report on the Safety from Electromagnetic Radiation in and around the CN Tower, produced by the Radiation Protection Bureau and published by the Minister of National Health and Welfare stated that radiation exposure levels from the CN Tower Toronto  in 1976 “are within currently accepted limits for both microwave radiation for workers in the Tower and for the general public” and that “[t]here does not appear to be a health hazard from the electromagnetic radiations emitted from the CN Tower.”

Yet, based on the very same document, a senior official with the US Occupational Safety and Health Administration stated that maintenance workers may be exposed to potentially harmful levels of radiation.

Click here for the 1980 Globe and Mail article “Radiation at CN Tower higher than US allows” and the corresponding health study about the CN Tower.

How could interpretation of the same data be so different? It turns out that the levels presented in the 1977 document are for individual broadcast frequencies used by TV and radio stations. If you add them all up for their cumulative exposure, it leads to a serious underestimate of wireless radiation exposures to people working near to the tower.  In one area that is only accessible to maintenance workers, it exceeded the Canadian safety guidelines and this area was designated a health hazard.

Back 25 years ago when these readings were taken the document states many of the transmitters placed on the tower were not yet functional. Since 1977, many more antennas for radio, tv and now cellphones have been installed on the CN Tower.  Today, if you walk around the City of Toronto with a radio frequency meter, the levels of radiation increase whenever you are in line of sight of the tower.  Are the levels at the CN Tower still below guidelines?  But more important, are the radiation levels safe for those who visit, work and now walk on the roof of the CN Tower? What about exposure of those who work and live in buildings surround the CN Tower? Will those who sign up for the EdgeWalk get more than they bargained for?

During July 1976 a survey of the electromagnetic radiation emissions from the CN Tower was made, to assess any possible health hazards to the general public and employees working within the Tower. Field intensity measurements were taken at all levels of occupancy within the CN Tower, on the roof of 5 downtown Toronto buildings, on 3 floors of the Bank of Montreal Building, and at ground level of the Toronto Dominion Plaza. Measurements were also taken along east, west and north radials from the CN Tower for distances up to 20 miles.

Unfortunately, at the time of the survey, not all the broadcast equipment had been installed into the CN Tower and some of the stations were not operating at their fully licenced power levels. However the survey results indicate that microwave radiation exposure levels are within currently accepted limits for both microwave radiation workers in the tower and for the general public. There does not appear to be a health hazard from the electromagnetic radiations emitted from the CN Tower.

Some interesting results from this document are as follows:

1.  The highest reading (2000 microW/cm2), in FM transmitter rooms Level 5, was double the Canadian guideline  (1000 microW/cm2) but was in a location that is not easily accessible and not frequently accessed.  I wonder if this area has signs stating that levels are above guidelines to warn workers? Level 5 is located right beside the EdgeWalk platform.

3.  Power density readings are provided individually for each frequency on the space deck, sky pod roof, restaurant, upper and lower observation decks, outdoor terrace, and for the surrounding buildings.  This doesn’t make any sense from an exposure perspective as people in these areas are exposed to all of the frequencies simultaneously.  As a result this is a serious underestimation of the actual exposure and may account for difference in interpretation with Health and Welfare Canada stating this was safe and the US government recognizing that the cumulative frequencies are important and stating it was unsafe.

4.  It would be worth repeating these measurements in the same locations to see how much they have increased before opening this rooftop amusement attraction to the public.  Click here to learn more about safety procedures for workers that repair TV, radio and cell towers like the CN Tower. 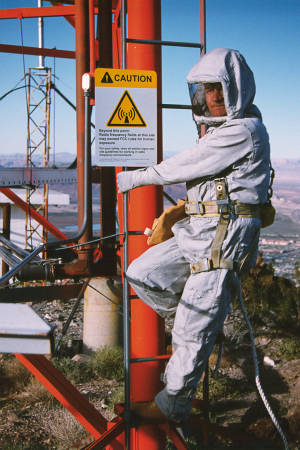 ← #025: Review of International Microwave Exposure Guidelines from 1957 to 1968.
May 2011: A month in review-IARC, WHO radio frequency possible human carcinogen; PACE dangers of electromagnetic fields →