A court-ordered study has found that electromagnetic waves beamed by Vatican Radio leave residents living near the station’s antennas at a higher risk of cancer. Italy’s most prestigious cancer research hospital, now admits that there is a connection between radio and microwave radiation and the cancer incidents.

The new 300-page research report, by a team at Milan’s National Tumor Institute led by Andrea Micheli, supports the claim of Cesano residents: Children living at a distance of 12 km or less from the antennas have a higher chance of dying from leukemia or lymphoma.

The researchers also said that a court prevented her colleagues from making the report available to media and they also could not discuss its content. According to magistrates, the report justifies the current investigation of six officials of Vatican Radio for manslaughter.

“There has been an important, coherent and meaningful correlation between exposure to Vatican Radio’s structures and the risk of leukaemia and lymphoma in children.”  The report also stated that there were risks of dying form cancer for people who had resided at least 10 years within a nine-kilometre (5.5-mile) radius of the radio’s giant antenna towers near Cesano, some 20 kilometres north of Rome.

The radio’s director, Federico Lombardi, disputed the report, saying: “Vatican Radio is astonished to hear the news on the results of the study.” Lombardi, who is also the Vatican spokesman, added: “Vatican Radio has always observed international directives on electromagnetic emissions and since 2001 has observed more restrictive norms set by Italy to allay the concerns of the neighbouring populations.”

Speaking on Vatican Radio, he said: “According to international scientific literature on the matter, the existence of a causal link like the one apparently hypothesised by the report had never been established.”

Herein lies the problem – The World Health Organization and other governing bodies that regulate wireless communication technologies have set safety standards based upon the heating of skin tissue – not upon the magnetic fields these waves have on the cell inside our bodies.  “It if does not heat you it does not hurt you” we are told.   Now, we are informed by cancer specialists that more children are getting leukaemia within 5 miles of the towers. The population living right beside the towers are showing symptoms of Radio Wave Illness. More people are dying from cancer.  How much more proof do we need?  These are world renown scientists from prestigious cancer institutions.

A Rome judge ordered the report in 2005 as part of an investigation into a complaint filed in 2001 by Cesano residents who alleged health hazards posed by the electromagnetic waves. A 2001 investigation by Italy’s environment ministry showed that magnetic fields in the area were six times more powerful than allowed, while Rome’s Lazio region estimated that the rate of deaths from leukaemia among children in the Cesano area was three times higher than in adjoining areas.

The Vatican now believes that the government of Italy is to blame for allowing builders to purchase land adjacent to the towers to create towns and villages. The limits may be too high right beside the towers, but the reason that the towers were constructed in a remote area is so that the towers would have no effect on the populations of large cities such as Rome.  If this is the case, and that everyone in the wireless industry knows there is a problem, why does every government in the world allow cell phone communication towers to be placed on the rooftops of apartment buildings?  Right under the roof of people 24 hours a day?

The History of Vatican Radio 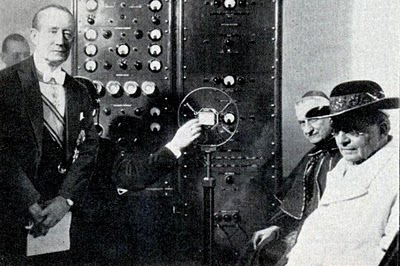 Guglielmo Marconi, the first to broadcast radio across the Atlantic ocean, came to the Vatican in 1931 and kissed the popes ring. By February 12th of that year Pope Pius XI inaugurated the airwaves of Vatican Radio. Marconi was an Italian catholic, and Pius was originally from Milan.  The idea originated with the Dir. General of Communications for Vatican City, Giuseppe Gianfranceschi who drew up plans for a wireless station in the Vatican that year.

Signals from two medium-wave transmitters reach all of Italy at all times, and 27 shortwave antennas are beamed at selected parts of the world in different languages at varying times. All papal speeches, news programs, and religious events are dispatched in 34 languages to all the corners of the world. To the Vatican, it’s as important as the Voice of America and Radio Free Europe were to the United States at the height of the Cold War.

To the inhabitants of Cesano and neighboring communities, the antennas, some transmitting at 600 kilowatts, its something of a nuisance and more —some people are hearing the Pope’s voice picked up by their front-door intercom……a warning of a possible death sentence from Vatican Radio radiation.

There are also thousands of radio and TV towers in the US that emit dangerous levels of radiation within the FCC safety limits.  But, what is considered to be a safe limit?  In the video below – Dr. Martin Blank presents a point of view concerning the debated safety limits from a group of scientists that created the Bioinitiative report – who believe the safety limits need to be revised.