December 2, 2010.  Information provided to the public by those who are promoting Wireless Smart Meters is misleading and factually incorrect!  Below is a document that was produced by Iberdrola USA and Central Maine Power. Can you find the one fact that is partially correct?   See answer below. 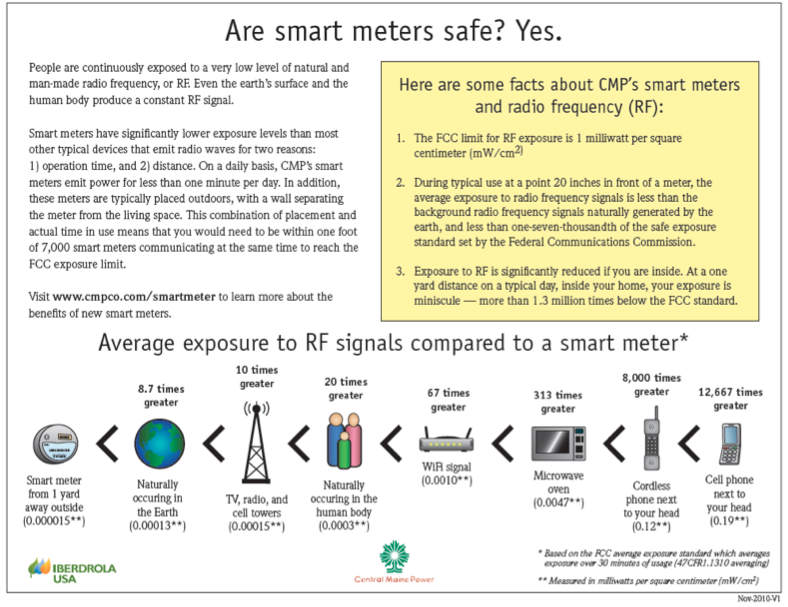 This document states that the FCC limit for RF exposure is 1 milliwatt per square centimeter.  This is the only statement that is partially correct.  In fact the FCC guidelines range from 200 to 1000 depending on frequency.

If you watched the video showing the constant radiation being emitted from one Wireless Smart Meter you would realize that the statement that these meters emit radiation for 1 minute a day is simply wrong.  If you watched that video you would also realize that at a distance of 1 yard, a smart meter emits much more radiation than that occurring “naturally on earth”.  And who would believe that the human body generates more radiation than a TV, radio and cell tower?

I wish this were a spoof but it isn’t.  This type of information is being doled out to an unsuspecting public who are not nearly as unsophisticated and ignorant as those working in public relation firms on behalf of the Smart Meter and utility industries would like to believe.

John Adams said, “Liberty can not be preserved without general knowledge among people.”

Fortunately, a growing number of people are becoming involved in the Smart Meter debate and they are sharing information that is both accurate and disturbing. What is disturbing is that a growing number of people who have Smart Meters on their home are getting sick.  Time will tell if this is a coincidence, a  psychosomatic response,  or is a real physiological response to radio frequency radiation?

First it was cell phone towers in the neighbourhood.  Then it was WiFi coffee shops, WiFi on planes, and WiFi in schools.  Now it is smart meters on every home.  Each of these devices emit radio frequency radiation increasing our exposure 24 hours a day.  How much radiation can the human body sustain and how long before we get the results from this global experiment we are conducting on our own species?  And who will have the courage to “turn the radiation off” when we discover that we are not able to survive in a soup of microwave radiation?

What is particularly disturbing is that the longer we are exposed to this radiation, the less radiation we will be able to tolerate.  At least that is the message from those who have become sensitive to radio frequency radiation. And these people who have become sensitive are the “early warning indicators”, the canaries in the coal mine.  Why do we not heed their warning?   They are foreshadowing what the rest of the world will experience as radiation levels continue to rise.  We can still avert this human health tsunami . . . if we change our ways . . . and we need to do this sooner rather than later.