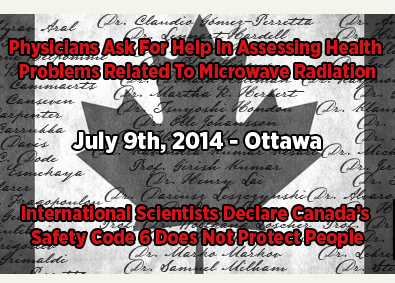 It is unconscionable that the primary health authority in Canada, Health Canada, has failed to provide protection against radiofrequency radiation as levels continue to increase in homes, schools, hospitals, offices, airports and airplanes, city streets, and residential neighbourhoods.

People are becoming ill and so far the medical profession in Canada, apart from a few enlightened individuals, is largely ignorant of the health risks of continuous exposure to wireless technology.  As long as levels fall below Safety Code 6 (SC6), an obsolete guideline based on a heating of tissue,  we are told this technology is safe.  Since levels seldom exceed SC6 the public, school officials, parents, teachers, doctors and nurses are under the false impression that they are all safe.  Even when levels exceed SC6, Health Canada officials tell us there is nothing to worry about!   Yet a growing number of people are becoming ill once a smart meter is attached to their home or Wi-Fi routers are installed in schools.

When will Health Canada recommend there be white zones in public places (areas without radiation) similar to “smoke-free” environments?

Why is it not OK for children under the age of 18 to use cell phones but OK for these same children to be exposed to Wi-Fi microwave radiation all day in school?

Who is Health Canada protecting as they are definitely not protecting the health of Canadians!

Scientists and physicians tend to be conservative in their desire to become involved in political issues.  They seldom speak out and would prefer to provide information behind the scene and only when asked to do so.  This private communication with Health Canada has been fruitless and now a growing number of them are willing to make their concerns public.  Hence these two declarations.

Since 1997 more than 22 appeals, resolutions and declarations have been signed by scientists and medical doctors . . . but governments are not listening. The few exceptions where stricter guidelines are used include Russia, China, Italy, Switzerland and several other European countries.  While Canada is rushing to install powerful Wi-Fi routers in schools, countries like France are converting to fibre optics and banning Wi-Fi in the classroom!

Let’s hope that these  two declarations will provide a turning point in Canada. We need to educate doctors on how to diagnose electrohypersensitivity and how to help their patients recover.

We also need better guidelines and warnings from Health Canada to protect the health of all Canadians and especially children so that we can divert the health tsunami that is just around the corner.

Health Canada . . . time to come clean and live up to your responsibility to protect the Health of Canadians.

← Teslamania Music Video: What’s that humming in your pocket?
CDC issues warnings on cell phone use. →