September 2009. Dr. Sam Milham, MD, has been researching the health effects of electromagnetic exposure for decades and his most recent paper, which appeared in the September issue of the Journal of Medical Hypotheses, is particularly disturbing. See summary below.

In the 1940s, there was a discrepancy between electricity use in rural vs urban centres in some US states. This allowed Milham to compare death rates for various diseases and relate them to the degree of electrification.

In states with 96% or more electrification, and hence little difference in electrification between rural and urban regions, there was no consistent pattern and little difference in the rural/urban death rate (see figure 5 below). However in states with less than 60% electrification, and most of that in urban centres, the death rate was significant higher in urban areas than in rural areas (figure 5). Similar trends were reported for deaths attributed to cancer, heart disease, diabetes, and suicide. 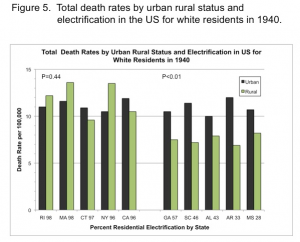 Milham then calculated the percent urban excess for these deaths as follows: All deaths 20.9%; suicide 29.5%; coronary disease 33.7%; all cancers 49.2%; and diabetes 66%. If this urban excess is due to electrification then we have a very serious health issue that needs to be addressed.

This important paper needs to be taken seriously by government health departments. Other scientific studies confirm these findings although none of them shows such dramatic results.

Doctors and scientists can readily understand how chemicals may either help or harm the body since we have a long history of chemicals and their biological effects both in terms of the healing effects of medication and the harmful effects of chemical pollutants. Indeed, we attribute the increase in the “diseases” of the 21st century to some combination of chemical toxicants (for example cigarette smoking and heart disease, asbestos and mesothelioma), or biological agents (such as the flu virus, bacterial infection, parasites, mould), and some combination of lifestyle choices (diet and exercise).

Few take into consideration the impact that the electromagnetic environment has on our health. For some reason the only harmful aspects of electromagnetic energy that are widely accepted include excess UV radiation leading to melanoma, x-rays and cosmic radiation contributing to various types of cancers, the heating effect of microwaves, childhood leukemia and magnetic fields, and light at night reducing melatonin levels and possibly contributing to breast cancer. Apart from these, it is assumed that electricity and the wireless technology that surrounds us is totally benign. How absurd!

The sooner we recognize that electromagnetic energy can both harm and heal the sooner we will be able to address many of the health issues we are facing today. We desperately need an infusion of information and/or a paradigm shift in the way health care professions, doctors, medical schools, and medical scientists understand and deal with electromagnetic energy. This understanding will come. My hope it that is comes sooner rather than later so that we can more effectively alleviate some of the causes of human suffering.
-magda havas