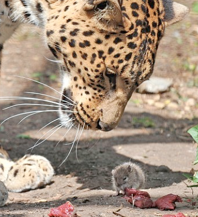 February 27, 2011.  Fear mongerer: one who uses fear to influence the opinions and actions of others towards some specific end. The feared object is sometimes exaggerated, and the pattern of fear mongering is usually one of repetition (adapted from Wikipedia).

Why is it that scientists who pronounce that electrosmog may be harmful to health are called “fear mongerers”?  Obviously it is to discredit them by implying that they are exaggerating the threat and somehow are gaining something by this action, perhaps attention.

The photo on the right shows one courageous mouse!

Most scientists don’t want attention from the media and often refuse to give interviews.  Scientists who speak out about the harmful effects of electrosmog do so out of desperation.  Those who speak out are often criticized, rightly or wrongly, by the “skeptic” community, some lose their research funding or their jobs because the financial fingers of the telecommunication industry are far reaching.  So why on earth would anyone want this type of negative attention!

The skeptics are wrong about fear mongering but they are right about one thing, fear can make people sick!

Fear may be motivated by an external threat or an internal insecurity and it may be real or perceived. Fear is a basic survival mechanism that warns us of impending danger and it can be a life saver.  If the fear is uncontrollable or unavoidable and prolonged, it can lead to chronic anxiety severely limiting the quality and duration of one’s life.

Fear can be a friend or foe.  It all depends on your personal relationship with fear.

If fear motivates you to act; to clean up your environment; to write letters to school boards, newspapers, government agencies; to be proactive in your community then it is a friend.  If it disempowers you and you become a slave to fear it becomes your enemy.  Once you have become a slave to fear your life is over.

Fear is far too often used to control others. Governments use fear to justify the loss of civil liberties; religions use it to control behaviour; adults use it to manipulate children; employers and unions use it to gain the upper hand; and bullies use it in a school yard. This type of fear must not be tolerated!

Most of the people we admire are those who courageously stood up, against vast opposition, for what they believed was right.  This is what a growing number of scientists, medical doctors and activists are doing around the world.  And the opposition is vast from government bodies to the multi-billion dollar wireless industry to electrical utilities and the manufacturers of electronic equipment.

The brave men and women who speak out are not fear mongerers, rather they are individuals who have placed society’s interest and wellbeing above their own with the hope that some will heed their warning and do what is right.

My advise to those who are afraid is that you have a choice, use the fear to empower you or allow it to disempower you . . . the choice is yours.

My advice to parents is . . . don’t raise your children on a diet of fear.  You may be doing them as much harm as the electrosmog, against which you are trying to protect them.

Here are some famous quotes about fear and courage to inspire you:

Courage consists not in hazarding without fear; but being resolutely minded in a just cause. ~Plutarch

Nothing in life is to be feared.  It is only to be understood. ~Marie Curie

To fear is one thing.  To let fear grab you by the tail and swing you around is another. ~Katherine Paterson

A cat bitten once by a snake, dreads even a rope. ~Arab Proverb

To conquer fear is the beginning of wisdom. ~Bertrand Russell

None but a coward dares to boast that he has never known fear. ~Bertrand Russell

He who fears something gives it power over him. ~Moorish Proverb

The greatest barrier to success is the fear of failure. ~Sven Goran Eriksson

Fear has its use but cowardice has none. ~Mahatma Gandhi

It is curious that physical courage should be so common in the world and moral courage so rare. ~Mark Twain

Courage is resistance to fear, mastery of fear, not absence of fear. ~Mark Twain

Do the thing you fear most and the death of fear is certain. ~Mark Twain

I learned that courage was not the absence of fear, but the triumph over it. The brave man is not he who does not feel afraid, but he who conquers that fear. ~Nelson Mandela

The only thing we have to fear is fear itself. ~Franklin D. Roosevelt

Fear doesn’t exist anywhere except in the mind. ~Dale Carnegie

Nothing is more despicable than respect based on fear. ~Albert Camus

It is not death that a man should fear, but he should fear never having lived. ~Marcus Aurelius

Never let the fear of striking out get in your way. ~Babe Ruth (baseball player)

The world shrinks or expands in proportion to one’s courage. ~Anais Nin

Courage is reckoned the greatest of all virtues; because, unless a man has that virtue, he has no security for preserving any other. ~Samuel Johnson