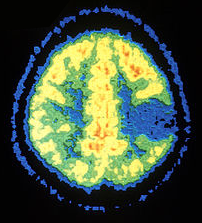 February 18,2010.  Another study by Hardell’s group documents an increased risk in malignant brain tumors.  Their sample size consisted of 1,251 cases and 2,438 controls. The highest risk was documented for astrocytomas, a common type of glioma. Image on right shows an astrocytoma at 3 o’clock.  Authors report an increased risk for brain tumors of 170% with cell phone use and 80% with cordless phone use after 10-years. In a separate analysis the highest risk for astrocytomas was among those who began using mobile phones before the age of 20.  For this group the risk increased by 390% for cell phones and 290% for cordless phones.  The risk for gliomas and mobile phone use increased with latency time and cumulative hours of use, which suggests a dose-response relation that is apart of the Bradford-Hill criteria for causation.

The results of this study do not bode well for the young generation of cell phone users. Unfortunately, this radiation permates our society and those who use a cell phone are contributing to second-hand radiation such that anyone near cell phone antennas is also exposed to this radiation.

Abstract: We studied the association between use of mobile and cordless phones and malignant brain tumours. Pooled analysis was performed of two case-control studies on patients with malignant brain tumours diagnosed during 1997-2003 and matched controls alive at the time of study inclusion and one case-control study on deceased patients and controls diagnosed during the same time period. Cases and controls or relatives to deceased subjects were interviewed using a structured questionnaire. Replies were obtained for 1,251 (85%) cases and 2,438 (84%) controls. The risk increased with latency period and cumulative use in hours for both mobile and cordless phones. Highest risk was found for the most common type of glioma, astrocytoma, yielding in the >10 year latency group for mobile phone use odds ratio (OR) = 2.7, 95% confidence interval (CI) = 1.9-3.7 and cordless phone use OR = 1.8, 95% CI = 1.2-2.9. In a separate analysis, these phone types were independent risk factors for glioma. The risk for astrocytoma was highest in the group with first use of a wireless phone before the age of 20; mobile phone use OR = 4.9, 95% CI = 2.2-11, cordless phone use OR = 3.9, 95% CI = 1.7-8.7. In conclusion, an increased risk was found for glioma and use of mobile or cordless phone. The risk increased with latency time and cumulative use in hours and was highest in subjects with first use before the age of 20.