Posted February 2010. In December 2009 an array of cell phone antennas was placed on an apartment building at 2 Regal Rd. in downtown Toronto, much to the surprise of the residents who first became aware of this construction as the cranes moved in. Watch the video and listen to what Veronica Ciandre experienced.

Within two months, those who lived on the top floor of this apartment building began to feel ill. Nausea, dizziness, buzzing in the ears, headaches, head pressure, difficulty sleeping, brain fog, skin rash, burning sensation in the skin, and a metallic taste in the mouth were just some of the symptoms. One woman and her daughter became so sick, they could no longer stay in their apartment and moved in with friends. The antennas were close enough to be touched by a broom from the top floor balcony.

Click HERE to listen to a CBC radio documentary about Veronica’s experience with cell these cell towers.

Click HERE to view a PDF of Veronica Ciandre’s story – My Life 6ft Under Cell Towers.

On February 13, 2010, the tenants asked us to visit their building and measure the radiation in their penthouse apartment and on their balcony. Levels of radiation were among the highest we’ve ever measured and we used several meters that all gave similar readings.

One of our more expensive meters stopped working when we tried to measured the exposure on the balcony and later learned this meter was programmed with a safety feature that turned itself off, to protect the electronics, when exposed to high levels of radiation.

You might expect levels this high to exceed Health Canada’s guideline for microwave exposure. This was not the case. Safety Code 6 states that if the power density, averaged over 6 minutes, is below a certain value (1000 micro Watts per square centimetre for cell phone frequencies) it will not heat your tissue and is considered safe. This guideline may be appropriate for cell phones where the user talks for, at most, a few hours, but for antennas on top of your bedroom, where you spend a third of your life sleeping, an exposure guideline of 6 minutes is grossly inadequate.

Let’s use cooking as the analogy for this thermal guideline. If it takes 6 minutes to cook a potato in a microwave oven set at high power, then we may assume that cooking the potato twice as long may require half the power. We can extend this cooking analogy to an 8-hour period during sleep or possibly a 24-hour period for those who are home all day. Based on this type of calculation the residents in the penthouse apartment of this building are “cooked” within one week. In other words, if exposures were weighted for time, the Safety Code 6 Guideline would be exceeded within one week.

Epidemiologists have found high cancer rates on the upper floors and residents have successfully removed cell phone antennas from apartment buildings, but only after years of struggle because of long-term, iron clad contracts that are highly profitable to landlords.

If landlords knew that these microwave transmitters affected the health of their tenants and of those in nearby apartment building, and if they knew that they might be legally liable for health claims attributed to these antennas they might not be so quick to sign these lucrative deals.  The woman in this case has hired an attorney and is suing her landlord. 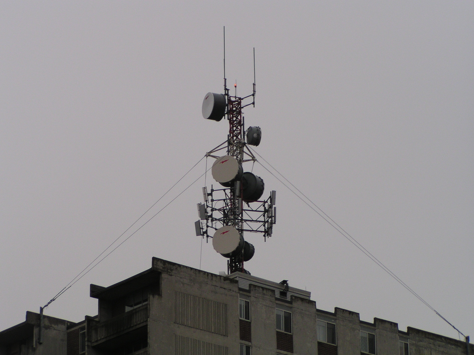 As awareness increases, occupants are likely to move out of these “sick” buildings resulting in vacant apartment complexes that are “condemned” by the neighbourhood. This type of action will surely send a strong signal to landlords and developers who think of roof-top towers as vertical realestate for cell phone antennas.

I’m not against cell phone antennas being placed on towers far from human habitation. However, these antennas should not be placed on top of or near apartment buildings, hotels, office buildings, schools, hospitals and fire halls, in other words, where people spend more than a third of their life. No amount of concealment will reduce the radiation from these antennas.

The media has started to bring attention to this issue. They need to investigate the microwave dangers lurking on the roof especially in large urban centres where roof-top antennas are the norm.

← Google offers alternative to WIMAX
What do dancing cows and zapped dogs have in common? →