January 6, 2012.  It is turning out not to be a good year for mobile phone users and for the naysayers who are trying to convince everyone that mobile phones are safe.

The long-awaited Cardis study, published January 2, 2012 in Occupational and Environmental Medicine (available online since June 2011), concludes that there is an increased risk of glioma (a type of brain tumor) in long-term mobile phone users with high RF (radio frequency) exposure and a lower risk for meningioma (a tumor of the membrane surrounding the brain). Indeed the risk for meningiomas was statistically significant in one analysis (after 7-years for group with highest exposure that included 21 cases and 51 controls).

This study, unlike other studies, attempted to estimate the amount of radiation at the site of the tumour.

Scientists observed  an increasing trend in gliomas with increasing radio freuqency dose for exposures after 7 years.  This relationship is statistically significant with a 1% probability  (p=0.01) that it is due to chance.  The exposure duration  is earlier than in previous studies that generally cite an inceased risk of tumours with mobile phone use after 10 or more years. Tumours were located primarily in the part of the brain receiving the maximum RF exposure.  While there are many types of potential errors in this type of work, the results agree with previous studies showing an increased risk of tumours on the side of the head receiving the greatest RF exposure for heavy mobile phone users.

These data point to a causal association but the authors conclude that, “The uncertainty of these results requires that they be replicated before a causal interpretation can be made.”  While this is correct from a scientific perspective, I question this conclusion from an ethical and policy perspective. What we do not lack are volunteers subjecting themselves to this radiation. What we do lack is funding to conduct studies on RF exposure for cancers and other illnesses and the political will to act in the interim based on data that are already remarkably damaging about the safety of mobile phone use and RF exposure. 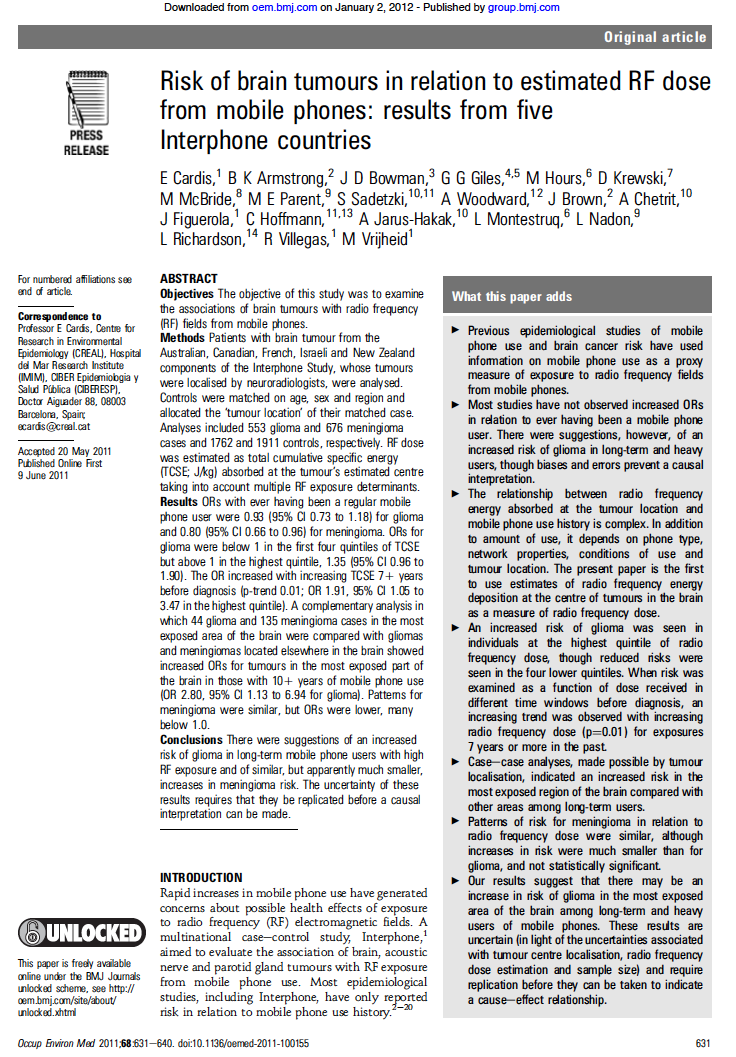 ← Wind turbines make waves: Why some residents near wind turbines become ill.
Microwave radiation affects the heart: Are the results real or are they due to interference? →