Thank you for taking the time to respond to my letter, dated October 8, 2011.

It seems that we disagree on many issues related to the health effects of radio frequency (RF) radiation.  But we are making progress.  We agree on the following three points, that:

(1)  proximity–how close the transmitter is to the body;
(2)  duration of exposure; and
(3)  age (hence sensitivity) of the person exposed

are all important when it comes to the amount of  RF radiation absorbed by the human body.

I come to this conclusion based on information you provided in your October 24, 2011 letter (see below) and based on the statement from the October 4th 2011 document entitled, “Health Canada offers practical advice on safe cell phone use: regarding cell phone use.” Click here for pdf.

Unlike cellular phones, where the transmitter is held close to the head and much of the absorbed RF energy is deposited in a localized area, RF energy from wireless devices such as Wi-Fi is typically transmitted at a greater distance from the human body [indicating that proximity is important].

In the October 4, 2011 document, Health Canada stated the following:

The department also encourages parents to reduce their children’s RF exposure from cell phones since children are typically more sensitive to a variety of environmental agents [indicating that age/sensitivity of person exposed is important].

The advice to consumers was:

By the way, activists have been advocating this for years.  Even cell phone manufacturers recommend keeping the phone away from the body.  However, I digress.

A wireless baby monitor consists of two parts, the part that is placed near the infant or child and the part that is kept with the caregiver. The most popular baby monitors in North America use DECT technology (1.8 to 1.9 GHz) or operate at 2.4 GHz, the same frequency used for microwave ovens, cordless phones, and Wi-Fi routers.  These DECT baby monitors–just like the DECT cordless phones and Wi-Fi routers–constantly emit RF radiation. This includes both the transmitter near the infant and the transmitter with the caregiver.

Let’s look at the first important factor that affects absorption–proximity to the body.

The caregiver needs to keep the monitor within hearing range and often places the device on the body (near the hips/genitals), similar to cell phones (see photograph of father with wireless baby monitor next to his hip).

Let’s look at the second important factor that affects absorption–duration of exposure.

The baby monitor is on when the baby is asleep, and for infants this amounts to as much as 16 hours a day.  During this period both the infant and the caregiver are exposed to RF radiation.  A worst-case scenario for the infant is 16 hours of exposure resulting in an annual exposure of 5,840 hours!

Let’s compare this to the INTERPHONE study with cell phones that reported an increase in brain tumours for those who used a cell phone for more than 1640 hours over a 10-year period.  This amounts to 164 hours exposure per year or 30 minutes exposure a day!

Another way of looking at this is that during the first year of life, an infant is exposed 3.5 times longer than the heaviest cell phone users over a 10-year period in the INTERPHONE study.  By the way, that 10-year cell phone user had a greater risk of developing a brain tumour.

Health Canada recognizes that children are typically more sensitive [than adults] to a variety of environmental agents.  Would Health Canada agree that infants are even more sensitive than children up to the age of 18? If you agree, then does it not make sense–at the very least–to issue an alert or warning or advisory to parents not to expose their infants to RF radiation and definitely not to place the baby monitor inside a teddy bear that the child cuddles?

Let’s look at another important factor that affects absorption–intensity of the radiation.

I measured the radiation generated by a wireless baby monitor (Philips Avent) and an iPhone at various distances.  The intensities were surprisingly similar.

RF radiation was measured with an electrosmog meter (50 MHz to 3.5 GHz) set at maximum in a RF-clean environment with background levels of exposure below 0.001 microW/cm2.  Bluetooth, 3G, and Wi-Fi were turned off during monitoring and the iPhone had 2 bars.

The maximum intensity of the radiation decreases with distance for both the iPhone and the baby monitor (see figure below).  Neither device exceeds Health Canada’s guideline of 1000 microW/cm2, which is based on heating, but both devices exceed the Russian guidelines within the first 10 cm and begin to approach the BioInitiative recommendations beyond 150 cm.  Since the levels of exposure are similar for both devices, and an advisory has been issued for cell phones than an advisory should also be issued for baby monitors. 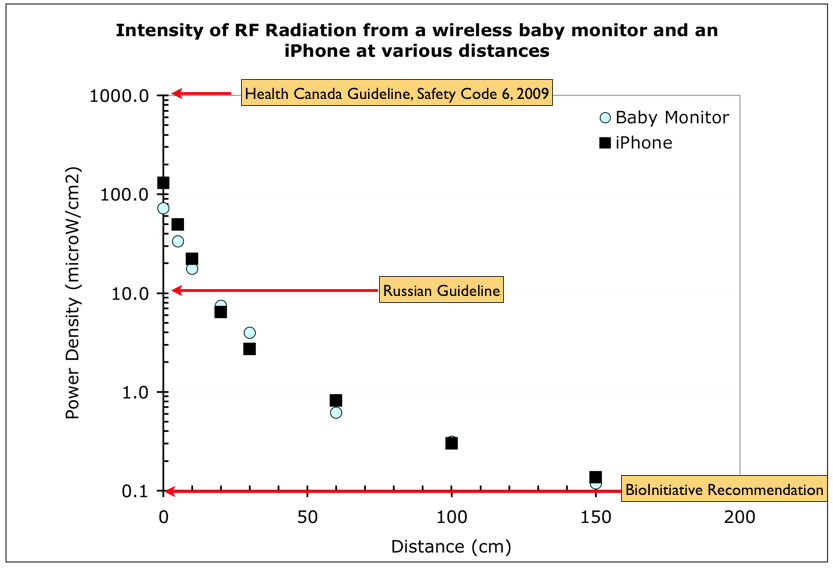 Parents trust that Health Canada would not allow products on the market that might be harmful to the health of Canadians and especially to their children.  If Health Canada wants to retain that trust it is imperative that the following steps be taken.

While we don’t agree on what is harmful and what is safe, we both want what is best for the health of Canadians.  Please ask your scientists to test various makes and models of baby monitors and if you agree that they continuously emit RF radiation, are held close to the body for long periods, and expose some of the most vulnerable among us, then please do what you are authorized to do, issue an advisory and protect the health of Canadians.

Your correspondence to the Honourable Leona Aglukkaq, Minister of Health on October 8, 2011, regarding your concerns about radiofrequency (RF) energy exposure from a variety of wireless devices, was forwarded to my office for response.

To begin, I must point out that cellular phones and other wireless devices (e.g. Wi-Fi) and their associated infrastructure (e.g. cell phone towers) are regulated by Industry Canada. Health Canada’s mandate on the issue of human exposure to radiofrequency (RF) electromagnetic energy, such as from cell phone towers and other wireless devices, is to carry out research into possible health effects, monitor the scientific literature related to such effects, and develop exposure guidelines such as Safety Code 6 (Limits of Human Exposure to Radiofrequency Electromagnetic Energy in the Frequency Range from 3 kHz to 300 GHz, 2009). To ensure that public exposures fall within acceptable guidelines, Industry Canada has developed regulatory standards that require compliance with the human exposure limits outlined in Health Canada’s Safety Code 6 (2009). For issues of non-compliance of wireless devices with the exposure limits outlined in Safety Code 6, please contact Industry Canada.

When developing the exposure limits in Safety Code 6, Health Canada scientists consider all peer-reviewed scientific studies and employ a weight-of-evidence approach when evaluating possible health risks from exposure to RF energy. This approach takes into account both the quantity of studies on a particular endpoint (whether adverse or no effect), but more importantly, the quality of those studies. Poorly conducted studies (e.g. inadequate exposure evaluation, lack of appropriate control samples or inadequate statistical analysis) receive relatively little weight, while properly conducted studies (e.g. all controls included, appropriate statistics, complete exposure evaluation) receive more weight. The exposure limits in Safety Code 6 are based on the lowest exposure level (threshold) at which scientifically-established human health hazards occur. Safety factors have then been incorporated into these limits to add an additional level of protection for the general public and personnel working near RF sources.

Health Canada scientists monitor the scientific literature on this issue on an ongoing basis and Safety Code 6 is periodically updated to take into account recent scientific data from animal, in vitro and epidemiological studies that were carried out worldwide. Safety Code 6 was last updated in October 2009. The limits recommended for general public exposure to RF energy are designed to provide protection for all age groups, including children, on a continuous basis. Based on a thorough review of scientific data, Health Canada has concluded that there is no scientific basis for the existence of any short- or long-term adverse health effects or of cumulative effects associated with RF exposure at levels below the limits outlined in Safety Code 6. These limits are consistent with, if not slightly more stringent, than the science-based standards used in most countries (e.g., the United States, the European Union, Japan, Australia and New Zealand).

Recently, the International Agency for Research on Cancer (IARC) classified RF energy as “possibly carcinogenic to humans” (Class 2B). In fact, a Health Canada scientist was part of the IARC Expert Working Group that examined this issue. The IARC classification on RF energy reflects the fact that some (limited) evidence exists that RF energy may be a risk factor for cancer. However, the vast majority of scientific research to date does not support a link between RF energy exposure and human cancers. Health Canada is in agreement with both the World Health Organization and IARC that additional research in this area is warranted.

Based upon the uncertainty surrounding a possible long-term risk of cancer, Health Canada recently updated its advice to cell phone users describing practical ways of reducing exposure to radiofrequency (RF) energy from these devices. This advice pertains only to cell phone use and not to RF energy exposures from other wireless devices (such as Wi-Fi, Smart Meters, baby monitors), since the intensity and distribution of the RF energy absorbed within the body from these devices are very different than from that of cell phones.

Some of the RF energy emitted by wireless devices is absorbed by your body, however the amount depends on how close your body is to a wireless device and the strength of the signal. Unlike cellular phones, where the transmitter is held close to the head and much of the absorbed RF energy is deposited in a localized area, RF energy from wireless devices such as Wi-Fi is typically transmitted at a greater distance from the human body. This results in very low average RF energy absorption levels in all parts of the body, similar to exposure from AM/FM radio broadcast signals.

Public exposure to RF energy from wireless devices, such as Wi-Fi and cellular phone towers, is far below the limits specified in science-based exposure standards such as Safety Code 6. Based on the very low exposure levels and the weight of evidence from peer-reviewed scientific studies to date, it is Health Canada’s position that public exposures to RF energy from wireless network devices do not cause adverse health effects in people. This conclusion is similar to that arrived at by the International Committee on Non-Ionizing Radiation Protection (ICNIRP), the Scientific Committee on Emerging and Newly Identified Health Risks (SCENIHR, European Commission), and the World Health Organization. Therefore, Health Canada does not consider additional precautionary measures are warranted to further reduce RF energy exposure below the limits currently outlined in Safety Code 6.

Thank you for writing.