Conflict of Interest: the Wireless Industry and ICNIRP 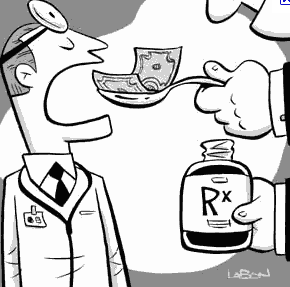 July 5, 2011. Who to believe?  Ironically, two reports published days apart have totally different takes on whether or not microwave radiation is harmful. Both are review articles but that is where the similarity ends.

In one publication [Long-term exposure to microwave radiation provides cancer growth: Evidence from radars and mobile communication systems] the authors claim no conflict of interest and then identify the studies documenting increase in cancers with microwave exposure among animal experiments and in epidemiological studies.  They recommend that ICNIRP guidelines require urgent reevaluation in light of this research.  Scientists and physicians from around the world have been requesting this for over a decade.  See: International Experts’ Perspective on the Health Effects of Electromagnetic Fields (EMF) and Electromagnetic Radiation (EMR).

In the other publication [Mobile phones, brain tumours and the INTERPHONE study: Where are we now? Click here for supplementary information] the authors provide one of the longest conflict of interest statements I’ve ever seen, yet claim they  have no conflict of interest!

Here is what their conflict of interest states:

Funding for research undertaken by MF and AJS has been provided by a number of sources, including the European Fifth Framework Program; the International Union against Cancer, which receives funds from the Mobile Manufacturers’ Forum and the GSM Association; the Mobile Telecommunications Health and Research Programme; the Swedish Research Council; AFA Insurance; and VINNOVA (The Swedish Governmental Agency for Innovation Systems). VINNOVA received funds from TeliaSonera, EricssonAB, and Telenor. All funds from commercial sources were via firewalls. The authors certify that their freedom to design, conduct, interpret, and publish research was not compromised by any controlling sponsor. AJS holds shares in the telecoms companies Cable and Wireless Worldwide and Cable and Wireless Communications. AJS’ wife holds shares in the BT group, a global telecommunications services company. MF, ACG, and AJS are members of the International Commission on Non-Ionizing Radiation Protection, an independent body setting guidelines for non-ionizing radiation protection. MF and AJS serve as advisors to a number of public advisory and research steering groups concerning the potential health effects of exposure to non-ionizing radiation.

What animal will bite the hand that feeds it?

Does it surprise anyone that this second document concludes, “Although there remains some uncertainty, the trend in the accumulating evidence is increasingly against the hypothesis that mobile phone use can cause brain tumours in adults.”

For someone who is intimately familiar with the studies they cite I find it fascinating how they skirt around the “inconvenient” results  that don’t fit their conclusions.

For example, they incorrectly state, brain tumour incidence trends, suggest that within about 10-15 years after first use of mobile phones there is unlikely to be a material increase in the risk of brain tumours in adults.  This statement is WRONG!

The studies show that after 10 years of moderate cell phone use (greater than 1640 hours or 30 minutes a day for 10 years) there is a statistically significant increase in ipsilateral gliomas (INTERPHONE STUDY).  They fail to mention parotid gland tumors and acoustic neuromas because they are strictly limiting their comments to two types of brain tumours, gliomas and meningiomas.

They go on to state, Data for childhood tumours and for periods beyond 15 years are currently lacking, implying that we don’t know if this will affect children or not.   What they fail to mention is that so far there has been one study with children and that study showed that those who began using a mobile phone before the age of 20 had a 5-fold increase in brain tumors well before “15 years!”

They fail to mention Appendix 1 and 2 of the INTERPHONE study that was published separately from the original article.  The really damaging information about cell phones and brain tumours is found in these two appendices and you have to ask the journal for them as they are not automatically provided with the primary article.  This in itself is most unusual. Click here for Lessons from the INTERPHONE Study and here for INTERPHONE Study:  It’s not just about brain tumours!

While I will not try to defend the INTERPHONE study as I do not believe it was well conducted despite the money that was thrown at it, I do believe that the honest scientists involved tried to get the information out via the appendices.

In Appendix 1 statistically signficant increases in gliomas range from 40% to 95%.

One embarasing result in the INTERPHONE study is that the results show that low to moderate cell phone use actually reduces the risk of cancer.  In Appendix 2 the authors try to correct this “error” and use  the lowest category of users as the reference category.  With this analysis the results for tumors was higher than in the original text.  After 10 years the gliomas increased in a dose response manner to 118% and after 1640 hours they increased by 82% instead of the original 40%.

The authors, Swerdlow et al., critique some of the best studies ever conducted–those by Lennart Hardell and his group in Sweden–and the senior author on that report was recently asked to resign from IARC because of a conflict of interest. IARC’s recent recommendation was to classify radio frequency radiation as a “possible human carcinogen.”  See WHO’s new classification of RFR:  What does this mean for Canada?

Instead of an 40% increased risk for gliomas as found in the INTERPHONE study, Hardell et al. report risks for commulative liftime use as high as 130%, 270% and 490% for cordless, digital cell phones and analogue cell phones respectively.  For acoustic neuroma, a benign tumour, the risks for these phones was 50%, 50% and 190%.  The highest risk was 280% for analogue phones with a latency period of greater than 15 years.  All of these were statistically significant (P=0.05).

The authors failed to mention a number of studies with similarly inconvenient results.  But, perhaps that is to be expected.

So who do you believe?  Those with a conflict of interest who claim not to have one or those without?