If WiFi harms trees, what about children?

November 24, 2010.  The debate about WiFi being used in schools continues to escalate as new research from the Netherlands shows that when ash trees are exposed to radiation emitted by WiFi base station antennas, the leaves discolor and gradually die.  The study reported that 70% of all trees in urban areas (but not those in dense forests) show the symptoms, compared to 10% five years ago. Although this is a preliminary study, which has not yet been published, it should be taken seriously.

Wageningen University was commissioned by the municipality of Alphen aan den Rijn to determine if electromagnetic radiation from cell phone towers or WiFi masts could play a role in the deteriorating health of the city’s ash trees. 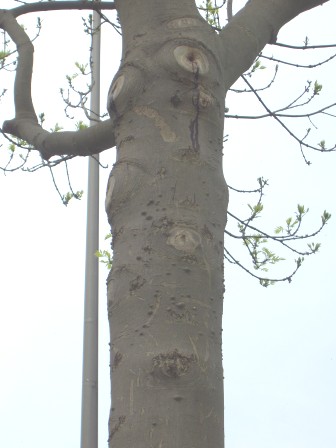 For the experiment, six WiFi access points where erected at various distances from the trees that were continuously exposed for more than three months. The frequency was 2.4 GHz (WiFi) with a power output of 100 mW EIRP, which is the maximum power allowed for use by portable laptop computers. Leaves that were two feet from the WiFI access point developed a metallic luster appearance, a discoloration of the leaves that appeared to result in the disappearance of the outer cell layer of the leaves. The metallic luster was then followed by desiccation and death of a portion of the leaf.

If  three months of exposure to WiFi microwaves adversely affects the leaves of trees what is it doing to the growing bodies of children who sit for hours each day in school two feet away from a WiFi enabled laptop computer or a ceiling mounted WiFi access point?

Aspen decline has been reported in North America over the past half century and rapid mortality of aspen clones has been observed in Colorado since 2004 and has become a major concern for environmentalists, scientists, and foresters.

In one experiment, published February 2010 in The International Journal of Forestry Research, scientists constructed mock-shielded cages and faraday-shielded cages in the forest just outside of Lyons, Colorado. The mock cage shielded aspen seedlings only from direct light – while the faraday cage shielded seedlings from all forms of radio frequency radiation originating from the town of Lyons in the frequency range of 1 MHz to 3 GHz. This includes radio broadcast signals as well as cell phone and WiFi signals.

The researchers discovered that the tree seedlings growing inside the radio frequency-shielded cages were much larger and healthier than those in both the mock-shielded cages and in the unshielded controls.  The authors report  that the background levels of radio frequency radiation may be adversely affecting leaf and shoot growth and inhibiting fall production of anthocyanins (these are the pigments associated with leaf senescence in trembling aspen seedlings). These results suggest that exposure to the RF radiation generated by our wireless technology may be an underlying factor in the recent rapid decline of aspen populations. 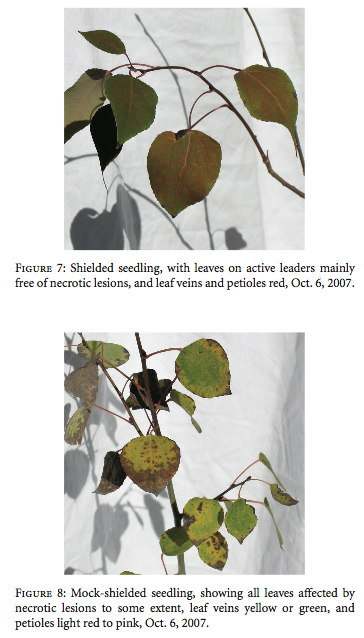 Click Here to view the research paper in PDF