July 4, 2012.  Are there non-thermal effects of electromagnetic fields?

For frequencies from 100 kHz to 300 GHz, tissue heating is the predominant health effect to be avoided. Other proposed non-thermal effects have not been conclusively documented to occur at levels below the threshold where thermal effects arise. 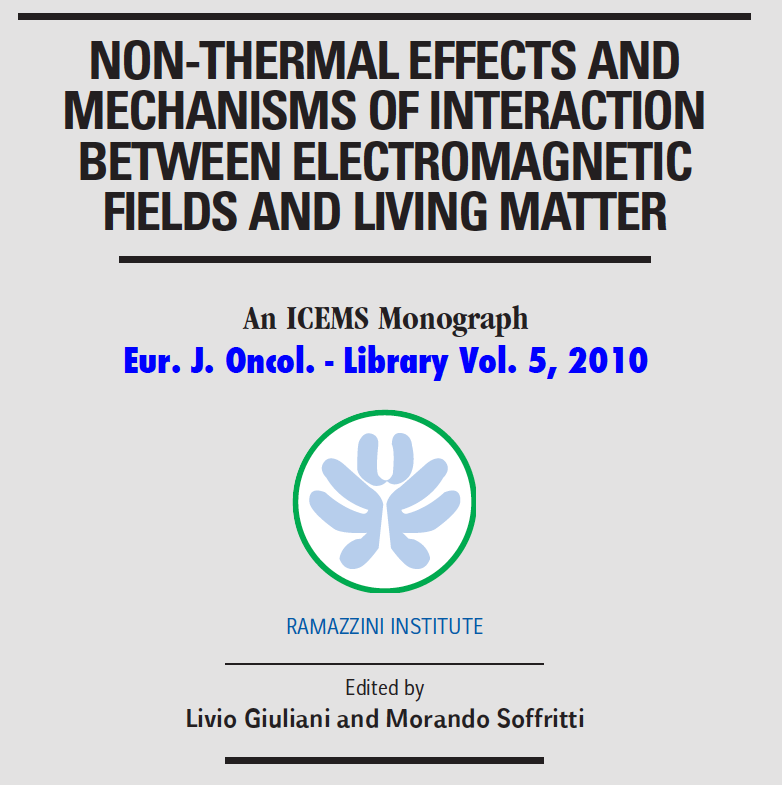 Perhaps Health Canada scientists should read this two part document prepared by the International Commission for Electromagnetic Safety (ICEMS).  Although this document was published in 2010, one year after the most recent Health Canada Safety Code 6 was updated (2009), much of the information it was based on was readily available to the review committee of Health Canada when they released their 2009 guideline.

The entire two part set is now available for free download at the ICEMS website.  It consists of :

The 24 original contributions, all peer-reviewed, are in 4 sections as follows:

Do non-thermal biological effects occur below existing international guidelines?  The definitive answer to that questions is “YES“!

We have even more evidence available  in the ICEMS Monograph 2010.

ICNIRP and countries like Canada, who still have only thermal guidelines, need to lower their guidelines to levels that are in line with those proposed in Salzburg in 2000.

For preventive public health protection a preliminary guideline level for the sum total of exposures from all ELF pulse modulated high-frequency facilities such as GSM base stations of 1 mW/m (0.1 μW/cm.) is recommended.

ICNIRP and Health Canada’s guidelines for GSM base station frequencies are 10,000 times higher than the Salzburg recommendation!

Debates about non-thermal and thermal  effects made sense back in the 1970s but we have learned much to recognize that non-thermal effects occur below existing international guidelines; that we understand many mechanisms involved; and that these non-thermal biological effects have some serious human health consequences.

Further debate about thermal vs non-thermal effects is a  red herring – a divertion of attention from the real issue of protecting public health and safety.  The only protection that ICNIRP and countries like Canada are providing is to the telecom industry.  Enough is enough!  It is time for Health Canada to live up to its name and for ICNIRP to come clean or commit apoptosis.

As Thomas Paine once wrote:  Either lead, follow, or get out of the way!

← Austrian Medical Association guidelines for diagnosing and treating patients with electrohypersensitivity
BRAG rate your school (or home or workplace or . . . ) for radio frequency radiation →