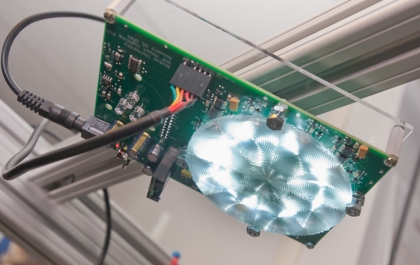 Smart LED lighting—the use of highly energy-efficient and controllable solid-state light sources both to illuminate a defined space and facilitate optical wireless communication among electronic devices in an office or classroom is now a reality. Professor Thomas Little of Boston University is shipping a new LED-based prototype.

“We now have a working system that’s robust enough to send to others to experiment with,” said Little, co-principal investigator and associate director of the NSF Smart Lighting Engineering Research Center, a program involving BU, Rensselaer Polytechnic Institute (RPI) and the University of New Mexico.

Designed for indoor applications such as illuminating a room and transmitting data among laptops, printers, PDAs, thermostats and other devices, LED-based smart lighting could deliver enhanced electronic communication capabilities at a reduced economic and environmental cost. Requiring far less energy than conventional lighting technologies, such as incandescent or compact fluorescent bulbs, and can integrate ubiquitous communication platforms, such as Wi-Fi. 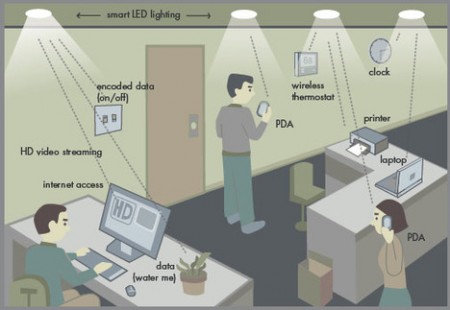 Much more compact, user-friendly and sophisticated than its predecessors, the current prototype, called Smart Light 1 (SL1), consists of a three-by-six-inch board comprised of two sections—one containing an array of nine high-brightness, white LEDs that transmit data to other transceivers, and the other with an array of three photodiodes that receive data. By keying the light on and off at a very high speed to create a pulsed signal, each SL1 board propagates data to laptops and other electronic devices, and is simply connected using a USB cable.

Toward a Commercial-Grade System

“The prototype demonstrates the viability of using modulated LED light at a useful data rate,” said Little. “The next step is to make the system completely self-contained, embedding all functionality within the bulb.” At that stage, each board will serve as an Internet and data communication access point for any electronic device within range, and thus enable multiple devices to communicate with one another. These include high definition video streaming devises like the iPad.

“The goal is to enable any light to be a wireless optical access point, and to do this requires costs comparable to conventional lighting devices,” he said. “Future work in the Smart Lighting ERC will drive towards higher data rates and lower integration costs.”

The Heinrich Hertz institute has developed a system that will transmit signals at 500 Mbits per second.

At the University of California, they have created the Center for Ubiquitos Communication By Light. The mission of the UC-Light center is to enable wireless communications by embedding signals into the light emitted by next-generation LEDs in systems for illumination, traffic control, advertising, and other purposes.  Imagine a world in the future where street lighting becomes wireless transmission antenna – sending digital signals back and forth from your light on your front porch.

A US company called LVX is developing a system for internet communications but while the US moves onwards towards research – Japan is already commercially using the technology. Watch the video below.

One major advantage of using light rather than radio waves for data transmission is that exposure to light radiation is limited as light does not travel through walls. However, before we give this technology the “thumbs up” it is essential that these “smart” LED bulbs not generate dirty electricity and that the pulsing frequencies have no biological effects on epileptics and others who are sensitive to light “flicker”.  So far the safest way to transmit data is along cables and while light may be safer than microwaves, the biological and health effects of pulsing light need to be tested before they are allowed in the workplace.

IR – Infrared Wireless LED is invisible to the eye and is already widely used for high speed data transfer for point to point communications where fibre optics is not possible. Free Space Optics (FSO) is a canadian technology that enables the optical transmission of data, voice and video through the air. It is a wireless broadband technology, which requires clear line-of-sight (LOS) between a pair of FSO transceivers. FSO is an alternative to Microwave or Radio Frequency systems.  This technology is not new – it was not widely adopted because of it’s drawbacks – if it snows or if the condition is foggy – the transmission suffers. For this reason RF radio waves are the choice of wireless providers…… But for indoors like a school classroom, LED has great potential.