If you think you are responding adversely to electromagnetic radiation, it is important that you share this document with your doctor/health care professional.  EHS is an emerging illness that has not been taught in most medical schools, especially in North America.  However, it is increasing at an alarming rate and now children as well as adults are adversely affected by this radiation.

According to Hallberg and Oberfeld (2006) the prevalence of EHS is increasing and by 2017, 50% of the population is likely to be electrically hypersensitive. 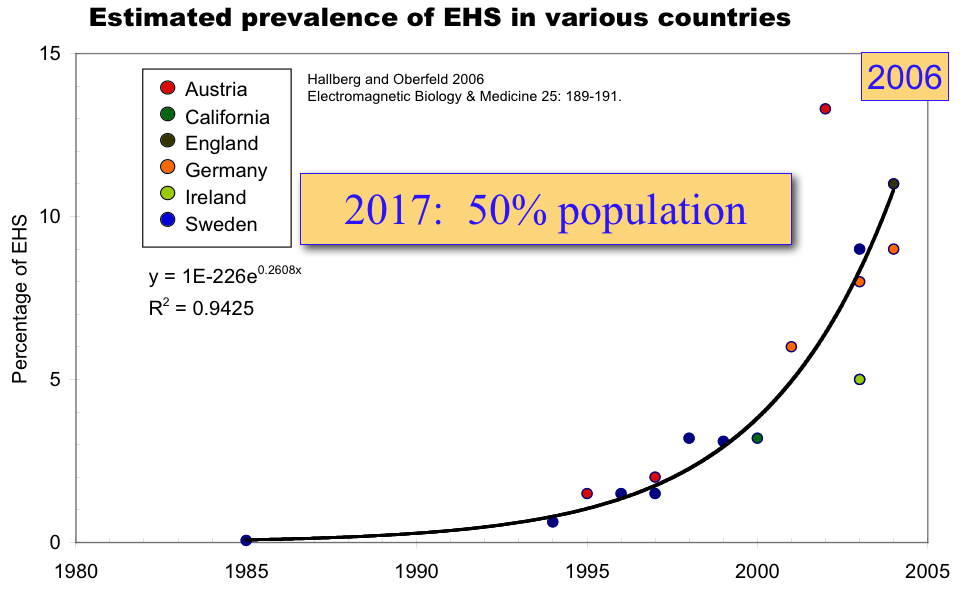 Below are excerpts from the Austrian Medical Association document Guideline.

There has been a sharp rise in unspecific, often stress-associated health problems that increasingly present physicians with the challenge of complex differential diagnosis. A cause that has been accorded little attention so far is increasing electrosmog exposure at home, at work and during leisure activities, occurring in addition to chronic stress in personal and working life. It correlates with an overall situation of chronic stress that can lead to burnout. [page 1]

Physicians are often confronted with unspecific complaints without clearly identifiable causes (Huss and Roosli 2006). It has been suspected that environmental conditions such as increasing exposure of the population to radio waves, emanating e.g. from cordless phones, mobile phone base stations, cell phones, GPRS, UMTS, data cards for laptop and notebook computers and wireless LAN (WLAN), but also exposure to electric and magnetic fields emanating from power lines, devices and equipment, may play a causal role (Blake Levitt and Lai 2010). For the medical profession, this raises new challenges in diagnosis and treatment. A central issue for the causal attribution of symptoms is the assessment of variation in health problems depending on time and location, which is particularly relevant for environmental causes such as EMF exposure. [page 1]

In Austria, there are no democratically legitimized limits to protect the general population from EMF exposure. The recommendations of the WHO, compiled by the International Commission on Non-Ionizing Radiation Protection (ICNIRP 1998), are based on a thermal model. These recommendations were adopted by the EU in its Council Recommendation of 1999  . . . without taking into account long-term non-thermal effects. [page 2]

Based on the scientific literature on interactions of EMF with biological systems, several mechanisms of interaction are possible. A plausible mechanism at the intracellular and intercellular level, for instance, is interaction via the formation of free radicals or oxidative and nitrosative stress . . . It centres on the increased formation of peroxynitrite (ONOO-) from a reaction of nitrogen monoxide (NO) with superoxide (O2-). Due to its relatively long half-life, peroxynitrite damages a large number of essential metabolic processes and cell components. [page 3]

This approach can serve as a plausible explanation of many of the health problems, symptoms and their progression observed in the context of EMF exposure. There are increasing indications that EMF syndrome (EMFS) should be counted among multisystem disorders (Pall 2007) such as Chronic Fatigue Syndrome (CFS), Multiple Chemical Sensitivity (MCS), fibromyalgia (FM) and Post Traumatic Stress Disorder (PTSD). [page 3]

The recommended approach to diagnosis and treatment is intended as an aid and should, of course, be modified as each individual case requires.

For more information, refer to the AMA 2012 guidelines (link provided above).