In response to the article, “City council disagrees with cell tower site,” in the Peterborough Examiner  on October 12.  I would like to thank Councilor Andrew Beamer for recommending the application be turned down and Councilors Hall, Pappas and Riel for opposing the reduced radius for notification of the proposed cell tower site.  People should have the right to be informed if a cell tower is coming within 400 meters of their home, one of the largest investments they will ever make.  It could affect property values–and worse–their health.

As some of you know, I do research on the health effects of radio frequency radiation and I am deeply disturbed with what I see happening in Peterborough.  I have lived and worked in this community since 1989 and appreciate the fact that we are living in a city that is close to areas of natural beauty and, in a city that is (or rather was) relatively pristine when it comes to radio frequency radiation or electrosmog.

Within a short period many new towers and even more antennas have been erected within City limits.  All of these antennas are exposing those who live and work within 300 to 400 meters to levels of radiation that other countries deem to be unsafe.

In May, 2011, the World Health Organization classified radio frequency radiation as a “possible human carcinogen” and, while this sounds relatively harmless, you must realize that the scientific community does not make this classification lightly and did it despite considerable industry lobbying.  Indeed, one member of the committee was relieved of his duties just prior to that meeting in May because of close ties to the telecom industry.  Others with close ties remain on the committee.

Recently, October 4, 2011, Health Canada issued a warning that children under the age of 18 should limit their use of cell phones. Those speaking on a cell phone may be exposed for a few minutes a day, possibly longer for heavy cell phone users, but people who live and work near antennas are exposed for hours each day.  Scientific studies recognize that the problem is with long-term, chronic exposure to levels that are well within Health Canada’s safety guidelines.  If we continue to build these antennas we will be exposed to this radiation 24/7!  Is this what we want as a community?

I am concerned about the proximity of towers to schools and residential areas and equally concerned about the number of antennas placed on any one tower.  With more antennas we have more radiation.  Co-location is important but it comes at a cost.  Each wireless provider wants to be the first to erect towers because they can rent the space to their competitors. Towers have become vertical real estate.

Some of my friends in Toronto are no longer able to live in their homes because 4G has come to their neighbourhood.  This is a much more powerful antenna that should not be placed within 1000 meters of homes. While your cordless phone may have a working radius of 100 meters, 4G antennas have a working radius well over 30 km.

You are told that scientist cannot agree if this radiation is harmful or not. Scientists who have been working on the health effects of this radiation will unanimously agree that long-term exposure to radio frequency radiation at levels well below Health Canada’s guidelines are harmful to human health. As a matter of fact, during the past 10 years leading scientists and medical doctors have signed at least 10 international resolutions and appeals asking that international guidelines be reduced.  Their requests have gone unheeded.  Despite this, countries in Europe and Asia are reducing their guidelines to levels that are a fraction of the guidelines in Canada.

Wind Mobile wants to promote competition for those using this technology and to do this they have to erect an “unknown” number of antennas for the “cell” concept to work, BUT, we need to ask, “what cost are the citizens of Peterborough willing to pay for this competition?”

I don’t know of anything that is more important than our health and the decisions you make, as City Councilors, will affect the health of Peterborough citizens for decades to come.   The future is in your hands.  Once you give approval for these antennas, there is no turning back.

Peterborough is still a safe place to live with “relatively” low levels of radiation but it won’t be if we continue down this slippery slope that we so eagerly and foolishly embarked on. Competition . . . at what cost?

How many antennas does Peterborough need? 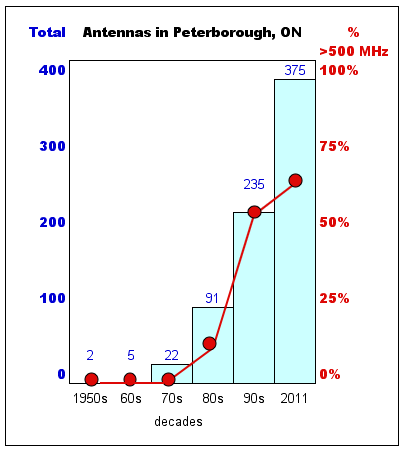 I went to the Industry Canada site, Spectrum Direct, and did a search for the number of antennas within a 7 km-radius of downtown Peterborough centered on Charlotte and George Street.  This 7 km takes us up to Trent University.

As of October 2011, within this area there were 375 transmitting antennas and 60% of them have frequencies above 500 MHz.  The highest frequency documented on the Industry Canada website for this area is 23.47 GHz.

How many more antennas does Peterborough need and what are the levels of radiation near these antenna sites?

A few years ago we measured radio frequency in downtown Peterborough and, except for a few hot spots (like the corner of Almer and Charlotte), the levels were so low I thought my meter wasn’t working properly.  Perhaps it is time to repeat those measurements.

For those who want to know how many antennas are near a particular location within Canada, visit Geographical Area Search at Spectrum Direct (click here), Industry Canada’s Website.

Enter the search criteria.  Select the range of frequencies; select transmitting antennas (Tx), receiving antennas (Rx) or both.  Enter the location using latitude and longitude (ddmmss).  This information is available at Google Earth. Select the desired radius for the search and the type of stations.  Then select the format for your output.  If you want to view the antennas but not manipulate the data then HTML will work.  Then all you have to do is click on “find” and the data appears within a matter of seconds.

Below are the settings I used for Peterborough. 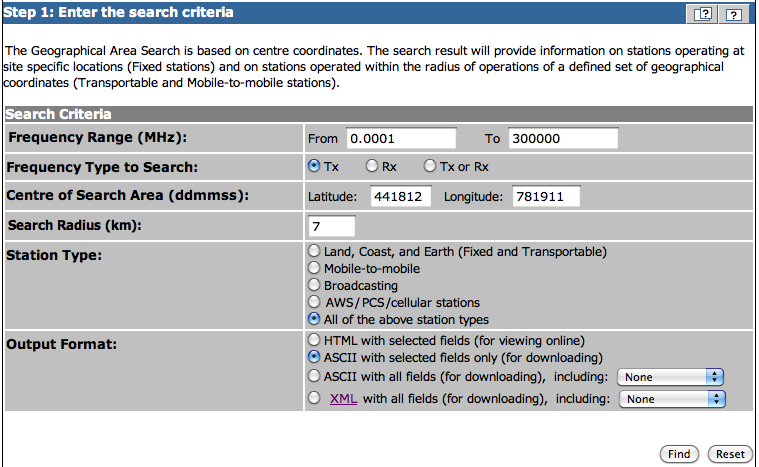 It is much easier to find antennas in the U.S. using www.antennasearch.com.

At this site, all you have to do is enter the address.  What could be simpler! 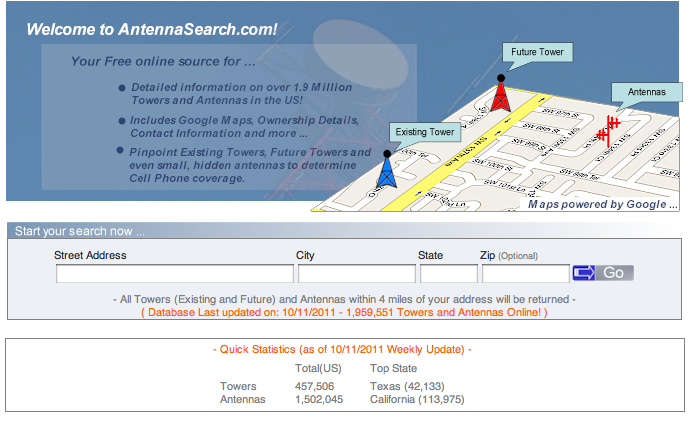 A few years ago students in one of my courses documented the number of antennas near schools in all U.S. state capitals.  The data are available in our BRAG report (click here to download).  This could make a good project for science classes.  Click here for more information.