The scientific study shows long-term exposure to Wi-Fi alters testes and sperm in rats.  The three policy decisions from the USA, Italy and Germany are likely to reduce local exposure to radio frequency radiation.  The fourth from Brussels is likely to increase exposure.

ted online January 24, 2014, in the journal Electromagnetic Biology and Medicine) document changes in the testes of rats exposed to Wi-Fi (2.4 GHz radio frequency radiation) for 24 h/d for 1 year.  They noted a number of changes including an increase in head defects among the exposed sperm compared with the control group; a decrease in the weight of the seminal vesicles and epididymis (tube attached to testicles containing sperm); a decreased in the diameter of the seminiferous tubules (where sperm meiosis takes place, meiosis is a form of cell division that halves the number of chromosomes in a cell and is common for sex cells such as sperm and egg); and  a decrease in the thickness of the tunica albuginea (the connective tissue covering the testes).  The authors recommend that,  “Wi-Fi users avoid long-term exposure of RF emissions from Wi-Fi equipment,” because “long-term exposure of 2.4 GHz RF emitted from Wi-Fi (2420 microW/kg, 1 g average) affects some of the reproductive parameters of male rats.”

According to the Federal Communication Commission, regulators are “beta” testing the next generation telephone network and they are planning to use high-capacity, fiber optics! This is excellent news as this should reduce exposure to radio frequency radiation. These “high-capcity” fiber optics are likely to be much faster, more secure, with less interference.  This is definitely a move in the right direction.  Hope Canada follows their lead. 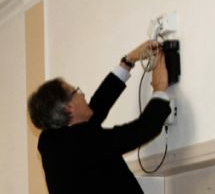 A school in the center of Italy (Civitanova Marche) decides to dismantle Wi-Fi and to use cable Internet to protect students.  This is a good example of schools placing the health of students and teachers above the convenience of wireless technology.  We need schools around the world to follow their lead.

Below is a rough google translation from Italian to English:

Via wireless, cable back to school

Civitanova – The St. Augustine has satisfied the demands of a committee of parents Thursday, January 30, 2014

The St. Augustine turns off Wi-Fi and goes back to wiring. This morning, the commissioner for Education, Piergiorgio Balboni, took the signal from the modem Wi-Fi in the primary school and put it on the new cable system. The symbolic gesture was the response to the parents’ committee of the institute who had asked City Council to remove the wireless internet access that could be potentially harmful to the health of children under the age of 12 years.

“The solution adopted by St. Augustine”- said Balboni – “is going to solve the problem of potentially damaging waves without having to stop teaching computer science.  We are waiting to proceed with the work of the final wiring. It ‘s always a thrill for me to greet the kids at school and support them in their educational activities.”

Alderman Balboni was attended by Director Claudio Bernacchia and parent representation. The project has received the financial contribution of the “Naturino”.

Click here for a link to the article in Italian.

German Federal Court rules that cell phone antennas can be placed on roof tops only if there is unanimous consent by shared property owners.   This is another example that gives power back to the people and, in the process, protects their health.

This post is brought to us courtesy of Katharina Gustavs and appears on the Rainbow Consulting Services website.

Apartment owners of a condominium association must not enforce the installation of cell phone antennas on their rooftop against the will of individual apartment owners.

The Federal Court of Justice of Germany (BGH) in Karlsruhe announced this decision in its ruling on Friday. Due to the controversy over possible health effects from cell phone antennas,
there is “at least the serious possibility of a reduction in the rental or sales value of the condominiums,” the explanation said.
Therefore, all apartment owners would have to support such a decision (Az.: V ZR 48/13).

Brussels used to have one of the strictest guidelines for radio frequency radiation of 3 volts/m.  Belgium’s mobile phone operators complained and, after years of discussion, the limit has been raised to 6 volts/m.  This is well above the 0.6 V/m recommended by the Salzburg Resolution and the BioInitiative Report but it is still below the ICNIRP,  FCC and Health Canada’s thermal guidelines of 61 V/m.

What is reassuring is that an independent committee of scientists, engineers, doctors and economists will monitor compliance with the new rules, something that is needed in North America.

Below is a table that compares radio frequency guidelines based on both power density and electric field for various regions (courtesy of Safe Living Technology, www.slt.co). Click on the table to enlarge. 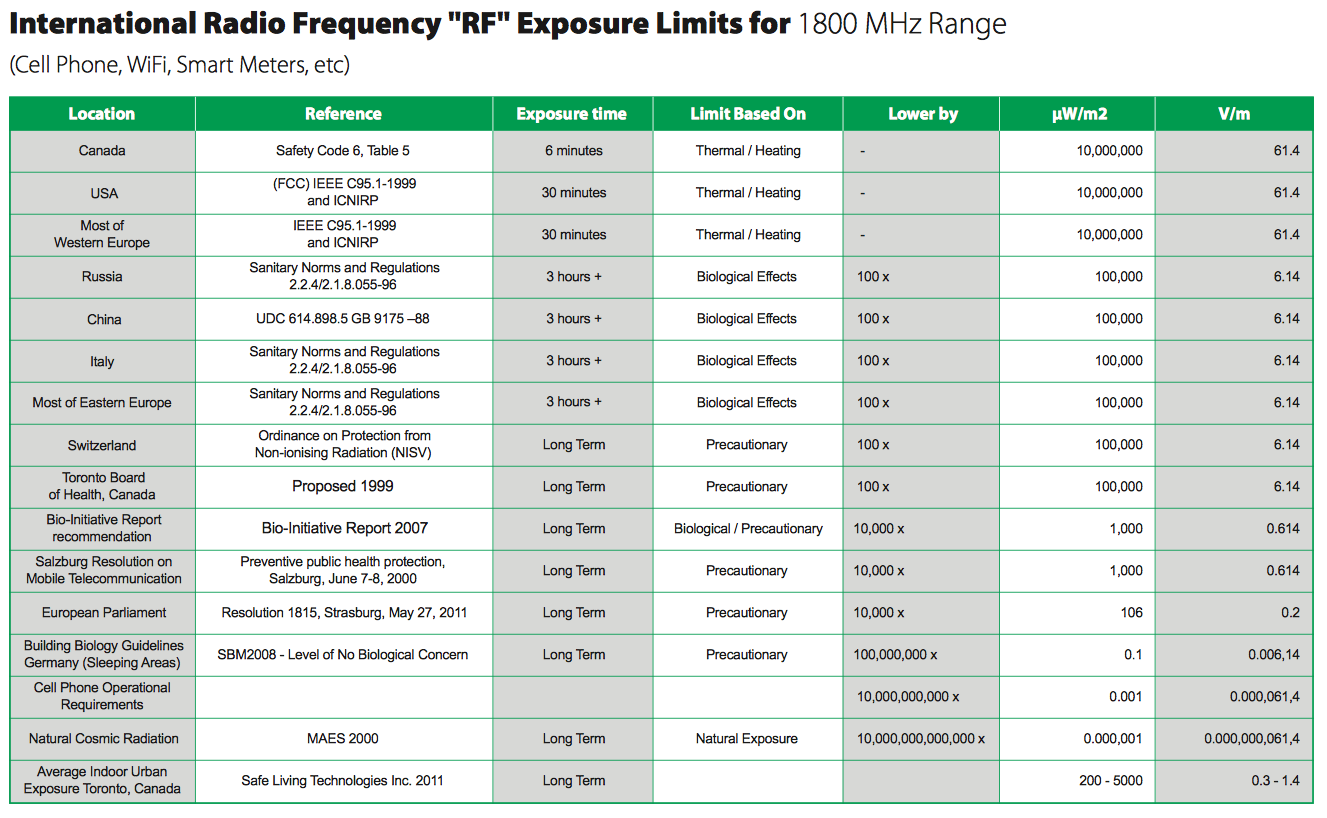 ← Recommended Electrosmog Meters
Electromagnetic Hygiene in 12 Easy Steps: How to create a cleaner electromagnetic environment at home and at work. →