Is there an association between covid-19 cases/deaths and 5G in the United States?

April 22, 2020 (updated May 7, 2020).  People are questioning whether there is a relationship between the rollout of 5G and the number and severity of covid-19 cases in various countries.  Claims have been made that the highest number of deaths attributed to covid-19 are in those places that deployed 5G during the past 2 years.  So I decided to look into the matter but found it difficult to get accurate and consistent data about 5G globally so I decided to narrow my range to the United States.

In the U.S. there were four major telecom providers (Sprint, T-Mobile, Verizon and AT&T) until Sprint and T-Mobile merged.  They use different frequencies and currently coverage is patchy at best.

5G consists of three frequency bands that can be labeled sub 1 GHz (i.e. below 1 GHz); sub 6 GHz and then much higher frequencies called mmwaves.  Some states have 5G mmWaves while others do not.  Angela Tsiang did an assessment of these states that is at the bottom of this webpage.

Currently there are 58 cities in 32 states that have some form of 5G.  Some states have only 1 provider while others have as many as four (if we consider Sprint and T-Mobile separately, for the time being).  The number of cities with 5G within each state also varies with California having the most cities (nine) with 5G.

I compared the average number of cases, deaths, and tests for covid-19 per million population in states with and without 5G and this is what I found (Table 1).  Note:  The data are standardized for population, which enables us to compare states with smaller and larger populations. 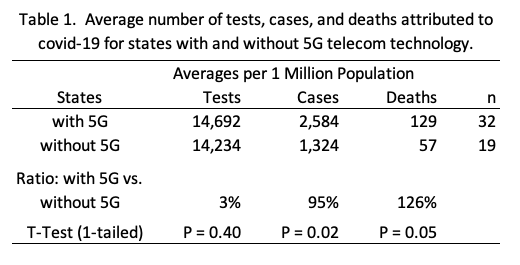 The average (mean) number of covid-19 tests per 1 million people is similar for the have (with 5G) and have not (without 5G) states.  Covid-19 cases per million are 95% higher and covid-19 deaths per million are 126% higher in states with 5G.  Whether these results are due to some factor other than 5G and whether this association will persist as time goes on remains to be seen.

Here is another way of looking at the data.  Note the log scale. 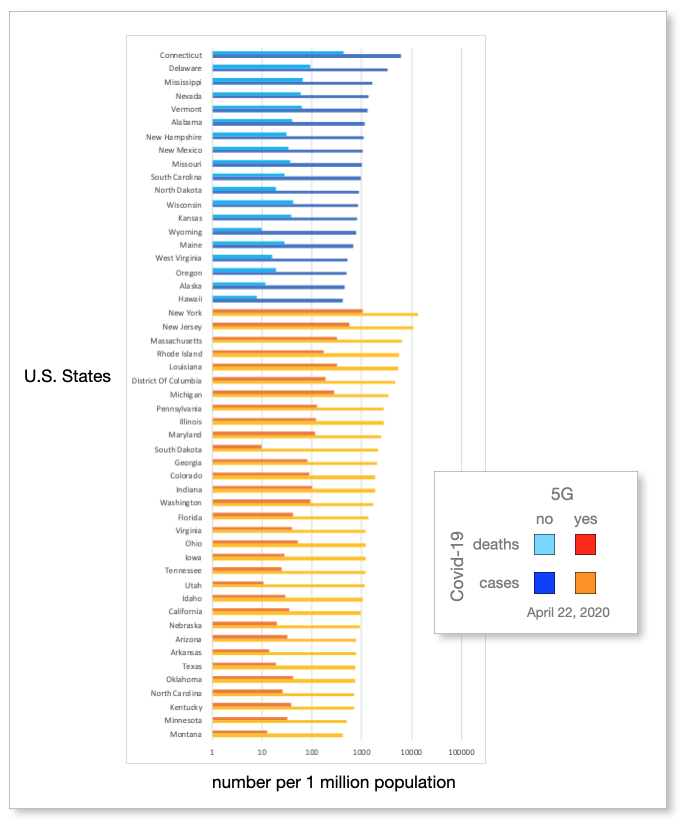 These data are changing daily and ideally they should be reassessed once we are past the peak of cases and deaths and once corrections are made for actual covid-19 deaths as opposed to other causes like the flu and co-morbidity.

Angela Tsiang reassessed the state data and differentiated between states with and without mmWave 5G. Her results are below in a table and two graphs.

Data are graphed below for cases and deaths attributed to covid-19 arranged by states that are with/without 5G mmWaves. 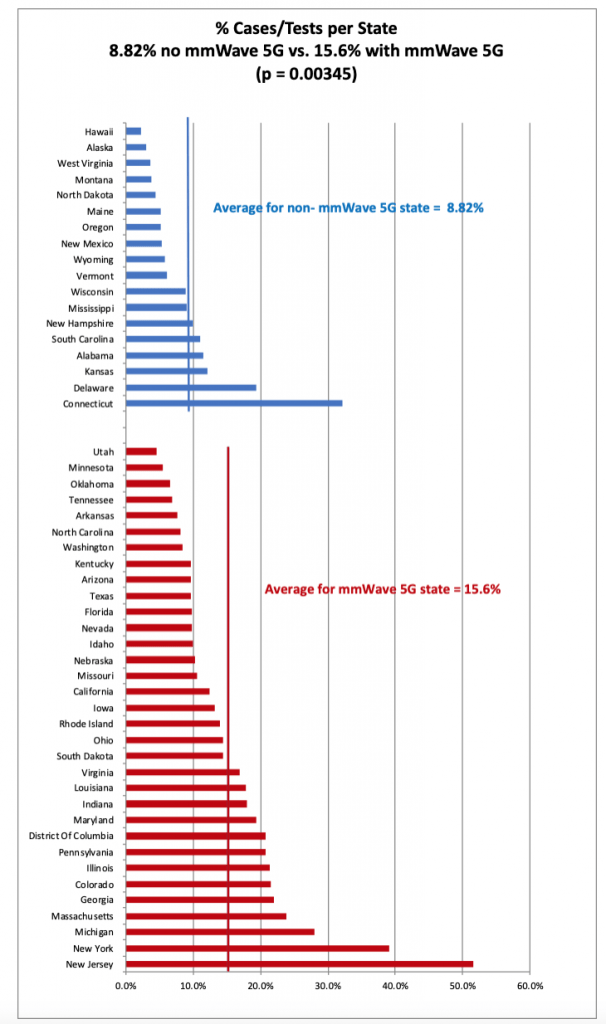 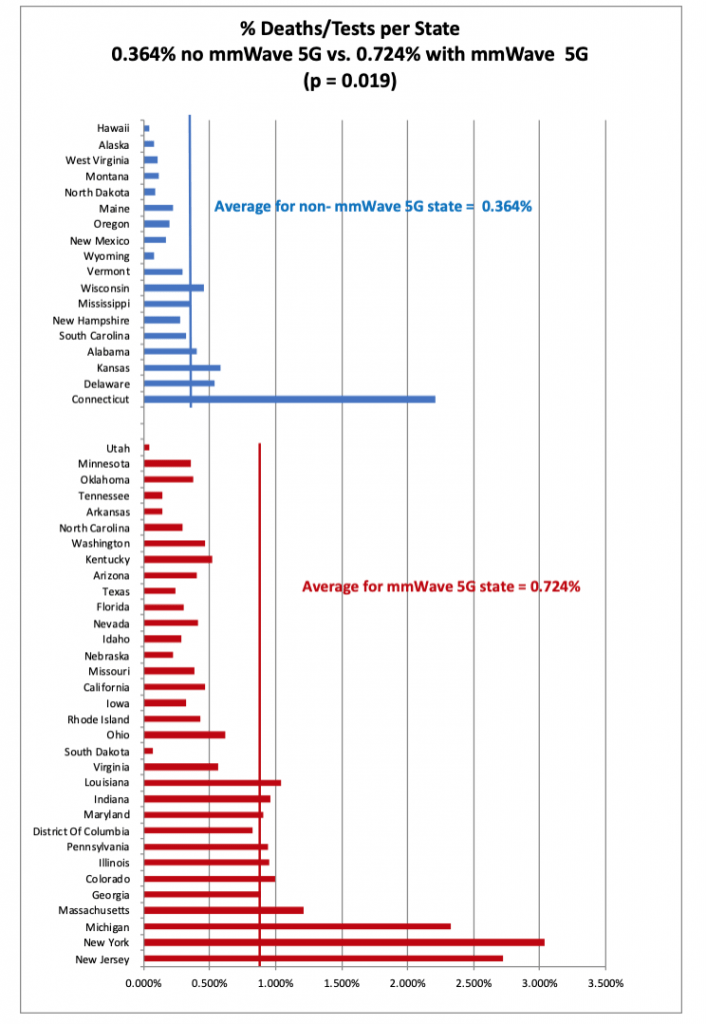 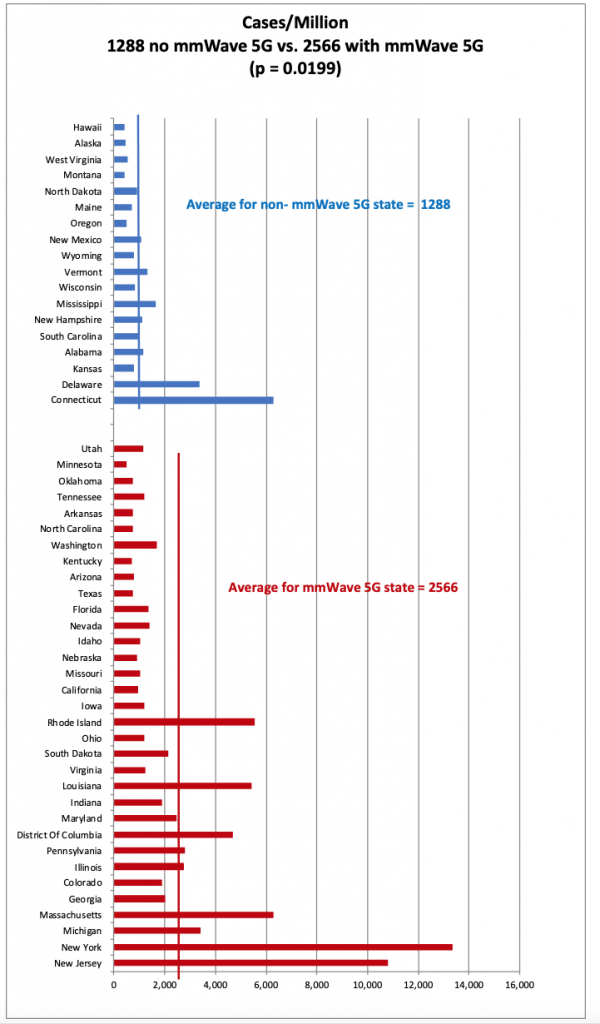 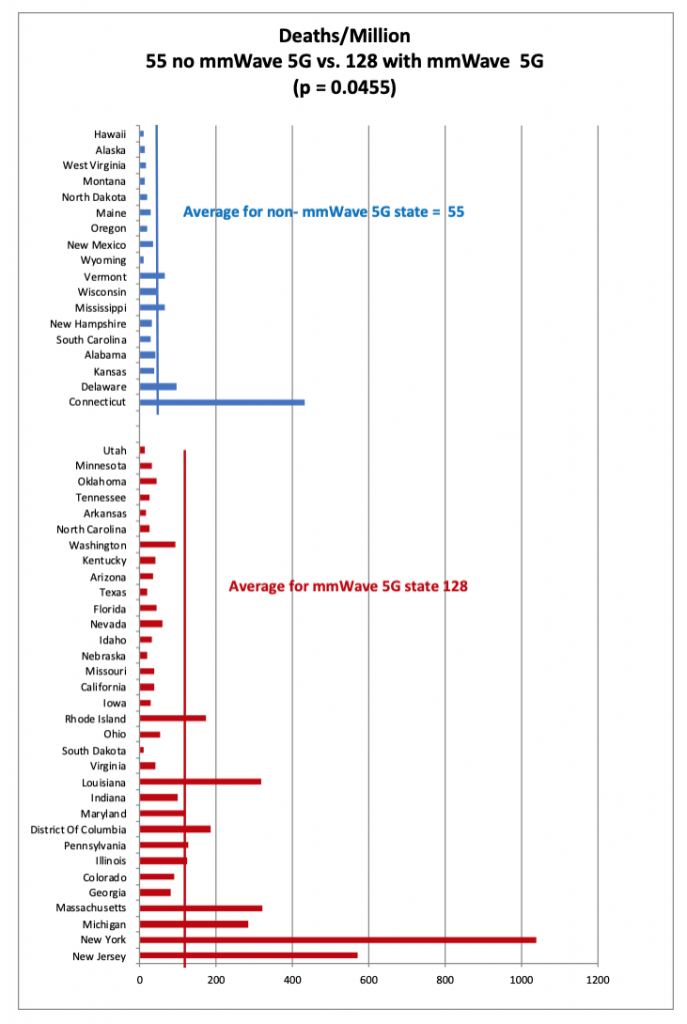 The current radio frequency guidelines in the U.S. do not protect public health.  They are based on a heating effect for short-term exposure.  If you live within 400 m of a cell phone base station you have a greater risk of developing cancer and a greater risk of neurohormonal dysregulation and this is based on similar frequencies currently emitted by 5G antennas.  Numerous scientific studies document impaired immune function, which could make individuals more susceptible to viral and bacterial infections.  Covid-19 had a great impact on the elderly as they often have suboptimal immune function.  Sage and Kerst (March 27, 2020) provide a list of more than 20 studies documenting a “disrupted immune function from exposure to low-intensity non-ionizing radiation (radiofrequency radiation).”  This disruption occurs at levels well below the FCC guidelines.

The degree to which these frequencies affect the virus remains unknown.

Scientists have been signing petitions and appeals to place a moratorium on the deployment of 5G and to establish safer RFR guidelines that truly protect public health.  But no one is listening.  People in positions of power think they can ignore the science and the scientists and eventually we will just go away.  Unfortunately it doesn’t work like that.  You can’t break a natural law … you just end up paying the price for your actions.  In this case, what this means is increased chronic illness among young and old alike and a greater susceptibility to biological vectors from bacteria, to viruses, to moulds and parasites.  The body has a harder time healing when it is constantly bombarded by radio frequency radiation (RFR).

Also, with 5G, numerous “small cell” antennas will be placed on lamp poles and traffic lights and power lines near people’s homes and hence they are likely to be exposed to even more radiation.  This is one reason why scientists are so concerned.

The difference in government’s response to covid-19 and exposure to RFR is that covid-19 is like a cruise liner striking an iceberg and leaking water to the point that–if measures aren’t taken immediately (lockdown for example)–the liner will sink with the loss of lives.

Exposure to RFR is more like a small leak that goes unnoticed until it is too late.

← Is there an upside to the covid-19 lockdown, which emphasis on the lockdown?
Patrick Timpone Interviews Magda Havas on One Radio Network on 5G in U.S. →