Corona Virus and 5G – is there a connection?

March 21, 2020.  Several people have asked me the question that is circulating among EMF experts, “Is there a connection between the outbreak of the Covid-19 and deployment of 5G networks around the world?”

I have been following the conversations regarding this and my opinion is as follows:

The best scientific evidence we have is that exposure to electrosmog (non-ionizing radiation from power frequencies to microwaves) impairs the immune system.  This is well documented in the scientific literature.  If your immune system is compromised because of electrosmog or because of certain medications you are taking or because you are elderly or very young you are likely to have a more severe and/or prolonged response to CoVId-19.  Dr. Joel Moskowitz has a blog on his website, Research on the Effects of Wireless Radiation Exposure on the Immune System, that I recommend you read. Here is the abstract from one publication by Dr. Stanislaw Szmigielski.

Abstract
Radiofrequency (RF) and microwave (MW) radiation have been used in the modern world for many years. The rapidly increasing use of cellular phones in recent years has seen increased interest in relation to the possible health effects of exposure to RF/MW radiation. In 2011 a group of international experts organized by the IARC (International Agency for Research on Cancer in Lyon) concluded that RF/MW radiations should be listed as a possible carcinogen (group 2B) for humans. The incomplete knowledge of RF/MW-related cancer risks has initiated searches for biological indicators sensitive enough to measure the “weak biological influence” of RF/MWs. One of the main candidates is the immune system, which is able to react in a measurable way to discrete environmental stimuli.

In this review, the impacts of weak RF/MW fields, including cell phone radiation, on various immune functions, both in vitro [cell culture studies] and in vivo [live animal studies], are discussed. The bulk of available evidence clearly indicates that various shifts in the number and/or activity of immunocompetent cells [cells that can develop an immune response] are possible, however the results are inconsistent. For example, a number of lymphocyte [small white blood cells especially found in the lymphatic system] functions have been found to be enhanced and weakened within single experiments based on exposure to similar intensities of MW radiation.

Here is an excellent video on your immune system under a microscope.

We have evidence that some people have an autonomic nervous system response to microwave radiation.  They have either an irregular heart rate or a rapid heart rate when they are exposed to microwaves.  We have published on this and also provide a youtube video on the research conducted.   This has been known for decades and those working with microwave radiation were recommend to have their heart tested for any abnormalities to ensure their safety.  If the heart becomes irregular it has difficulty pumping enough blood to all body parts and since the blood is what brings oxygen to cells this could lead to anoxia (insufficient oxygen) and make breathing more difficult.

Havas M, Marrongelle J, Pollner B, Kelley E, Rees CRG, and Tully L.  2010. Provocation study using heart rate variability shows microwave radiation from 2.4 GHz cordless phone affects autonomic nervous system.  Non-thermal effects and mechanisms of interaction between electromagnetic fields and living matter Mattioli 1885, 2010: 273-300, ISBN 9788862611664
Abstract
Aim: The effect of pulsed (100 Hz) microwave (MW) radiation on heart rate variability (HRV) was tested in a double blind study. Materials and Methods: Twenty-five subjects in Colorado between the ages of 37 to 79 completed an electrohypersensitivity (EHS) questionnaire. After recording their orthostatic HRV, we did continuous real-time monitoring of HRV in a provocation study, where supine subjects were exposed for 3-minute intervals to radiation gener-ated by a cordless phone at 2.4 GHz or to sham exposure. Results: Question-naire: Based on self-assessments, participants classified themselves as extremely electrically sensitive (24%), moderately (16%), slightly (16%), not sensitive (8%) or with no opinion (36%) about their sensitivity. The top 10 symptoms experienced by those claiming to be sensitive include memory prob-lems, difficulty concentrating, eye problems, sleep disorder, feeling unwell, headache, dizziness, tinnitus, chronic fatigue, and heart palpitations. The five most common objects allegedly causing sensitivity were fluorescent lights, antennas, cell phones, Wi-Fi, and cordless phones. Provocation Experiment: Forty percent of the subjects experienced some changes in their HRV attribut-able to digitally pulsed (100 Hz) MW radiation. For some the response was extreme (tachycardia), for others moderate to mild (changes in sympathetic nervous system and/or parasympathetic nervous system). and for some there was no observable reaction either because of high adaptive capacity or because of systemic neurovegetative exhaustion. Conclusions: Orthostatic HRV combined with provocation testing may provide a diagnostic test for some EHS sufferers when they are exposed to electromagnetic emitting devices. This is the first study that documents immediate and dramatic changes in both Hearth Rate (HR) and HR variability (HRV) associated with MW exposure at levels 18-havas:18-havas 11-10-2010 9:14 Pagina 273 well below (0.5%) federal guidelines in Canada and the United States (1000 microW/cm 2).
Here is another study documenting changes in HRV (heart rate variability) for those exposed to medium frequency EMR.
Bortkiewicz, A,  E Gadzicka, and M Zmysl.  1996. Heart rate variability in workers exposed to medium-frequency electromagnetic fields. Journal of the Autonomic Nervous System 59(3):91-7.
Abstract
This study was undertaken to evaluate the neurovegetative regulation of the heart in workers occupationally exposed to medium frequency (MF) electromagnetic (EM) fields. The subjects were 71 workers of MF broadcast stations, aged 20-68 (mean 47.1) with the duration of work under exposure ranging from 2-40 years and 22 workers of radio link stations, aged 21-65 (mean 46.9) who were not exposed to MF EM fields. The distribution of age and work tenure in both groups did not differ significantly. Heart rate variability (HRV) was analysed basing on 512 normal heart evolutions registered in resting, from the body surface, using the Medea-HRV system. The analysis concerned time-domain and frequency-domain parameters of HRV using fast fourier transformation. Power spectrum in the low (0.05-0.15 Hz) and high (0.15-0.35 Hz) frequency bands (LF and HF, respectively) was determined. Statistically insignificant differences found between exposed and non-exposed groups were found either in time- or in frequency-domain parameters of HRV. No correlation between the power spectrum and the subjects age was noted. Such a relationship, however, could be observed in the control group. In the study group a statistically significant negative correlation was found between the maximum intensity of EM fields and HF power spectrum. Thus it was concluded that occupational exposure to EM fields brings about impairments in the neurovegetative regulation of the cardiovascular function.

We have evidence that some individuals develop rouleau  of their red blood cells.  In other words, their red blood cells instead of repelling each other begin to stick together making the blood more viscous. This could impede oxygen delivery to cells making breathing more laboured.  We have published on this as well.
Here is a youtube video “Dr. Magda Havas’ Live Blood & Electrosmog”.
Havas, M.  2013. Radiation from wireless technology affects the blood, the heart, and the autonomic nervous system Reviews on Environmental Health 28(2-3):75-84.
Abstract
Abstract Exposure to electrosmog generated by electric, electronic, and wireless technology is accelerating to the point that a portion of the population is experiencing adverse reactions when they are exposed. The symptoms of electrohypersensitivity (EHS), best described as rapid aging syndrome, experienced by adults and children resemble symptoms experienced by radar operators in the 1940s to the 1960s and are well described in the literature. An increasingly common response includes clumping (rouleau formation) of the red blood cells, heart palpitations, pain or pressure in the chest accompanied by anxiety, and an upregulation of the sympathetic nervous system coincident with a downregulation of the parasympathetic nervous system typical of the “fight-or-flight” response. Provocation studies presented in this article demonstrate that the response to electrosmog is physiologic and not psychosomatic. Those who experience prolonged and severe EHS may develop psychologic problems as a consequence of their inability to work, their limited ability to travel in our highly technologic environment, and the social stigma that their symptoms are imagined rather than real.

Some claim that the CoVic-19  outbreak was more severe in areas that had deployed 5G millimetre waves early and that somehow this radiation is making the virus more infectious or that people are responding to the millimetre waves rather than the virus.  This is a possibility but currently there is no evidence to support this assertion.
We have evidence that some infectious agents became more virulent following deployment of other parts of the electromagnetic spectrum and an excellent book on this is “The Invisible Rainbow” by Arthur Firstenberg.  This is one of the best books detailing the history and biological effects of electromagnetic pollution.  You can purchase it at Chelsea Green Publishing.
One of the assertions is that 60 GHz frequencies are used in Wuhan Province and on the Princess Cruise Lines and that 60 GHz frequencies are absorbed by oxygen in the atmosphere.  Should someone inhale oxygen that is stimulated by this frequency it will change the vibrational quality of the oxygen molecules and this will not bind as readily to hemoglobin resulting in an oxygen deficit.
We have evidence that oxygen does have an absorption peak at 60 GHz but the other assertions, to my knowledge, remain unsupported by scientific data.  Clearly more research is required. 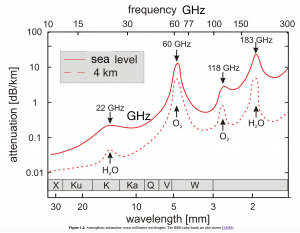