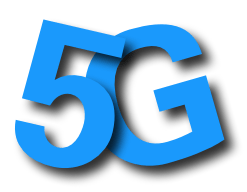 February 16, 2018:  I recently came across a document in my files that consists of a review of research from Russia and the Ukraine on microwave radiation that includes frequencies from 30 to 300 GHz.

This range of frequencies from 30 to 300 GHz is called millimetre waves (mm waves) and is the range that is being tested for 5G technology. To my knowledge there is very limited unclassified research available documenting the short-term and long-term biological effects of these high GHz frequencies and because of this, this translation is very valuable.

Here is the full reference and the table of contents:

This document provides either wave length or frequency to differentiate the specific parts of the electromagnetic spectrum being tested.  As a reminder, you can convert from one to the other using the equation below:

So a frequency of 30 and 300 GHz has a wavelength of 10 and 1 mm respectively.  The higher the frequency the shorter the wavelength.

Below are excerpts from this document:

This review examines primarily direct experimental studies of the effects of low-intensity high frequency electro-magnetic fields (HF EMF) on biological subjects, including humans. Unlike epidemiological observations,  direct experiments allow parameters of the acting EMF to be established more accurately, the condition of the subject to be monitored before and during exposure and for a certain period afterwards, and scientific hypotheses on the mechanisms of the effects to be verified. Clinical experiments done with the intention of improving the condition of the patients are the only legitimate experiments on people, and for this reason, published articles more often deal with the positive effects of HF EMF. One should consider, however, that EMFs with therapeutic effects comprise only a minuscule portion of all acting fields, and that there is a large probability of harmful effects from incidental generalized exposure, as confirmed in experiments on animals.

Three possible channels were pointed out for conduction of operative signals within an organism over considerable distances: the nervous system, the humoral system and the system of acupuncture points. In addition, a number of peculiarities of these channels were discovered:

• Conduction of signals through the nervous system is accomplished in the myelin sheaths of the axons.

• Conduction of signals through the humoral system is connected with the movement of generating cells through the blood and lymphatic systems. In this way, within the organism, the transmission of signals is accomplished, apparently, not by conduction of radiation, not by movement of charges, but by the displacement of generator-cells, the oscillations of which reflect the information being carried.

Permissible operational levels of radio frequency and microwave radiation for an 8-hour differ greatly between the USSR and the US (1996) as shown in the table below: 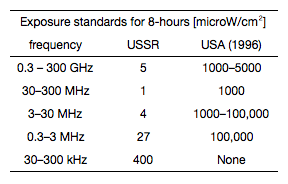 This document is highly technical and not written for a general audience.  It’s value is that it provides research on high GHz frequencies (mm waves) and provides us with a glimpse of what some of the effects are likely to be once 5G becomes ubiquitous.